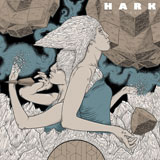 Personally I felt it was a sad day for underground British rock music when Taint split up. Having been turned on to them by accident when a friend recommended their fabulous debut, ‘The Ruin Of Nova Roma‘ back in 2007 and to be honest I only gave it a chance because it was on Lee Dorian’s awesome Rise Above Records. I immediately fell very much in love with the Welsh power trio’s collision of stoner prog meets snarling punk. It was quite different from anything else I was listening to at the time.

Fast forward to 2011 and after two great albums for the label the ride was over, but out of the ashes chief songwriter and frontman Jimbob Isaac emerged with a new project, Hark, who debuted a year later with a much sought after, limited 7″ single ‘Mythopoeia‘ on Super Fi Records.

For those who read my review at the back end of 2012 or have managed to get hold of a copy of the two tracks since would have been pleased to hear a direct collation between the genre bending post hardcore, stoner rock and flat out power of Hark with Jimbob’s former band.

Having taken their time to ensure that their first album maintains the same kind of quality and intensity as the initial taster, ‘Crystalline’ has recently been released on Season of the Mist and it will not disappoint.

Backed once again by former Wheatleaf members Nikolai Ribnikov and Simon Bonwick (bass and drums respectively) this stable line up has allowed the band to build on and improve the hints of lightning in a bottle they captured on the original 7″ release and it is effectively that blueprint ‘writ large’ and expanded on with a bullish defiance that beckons the listener into a world of intelligent lyrics, acerbic observations and intense multi-faceted, challenging music.

‘Palendromeda‘ opens the album in a style that will be familiar to those who were fans of Taint and got their hands on ‘Mythopoeia‘ as the big epic riff breaks out with it’s intense post hardcore style, mixing with the mesmerising melody and turn on a dime musical direction. The rolling grooves are captured with all the rich textures that the song deserves and brought out in an unfussy way by Converge’s Kurt Ballou who handled the mixing duties. Jimbob’s raw, yet soulful voice is articulate and passionate, whilst the other two members deliver the kind of muscular backing that each piece deserves.

Much of the album is based around creating bruising and emotive sounds like follow up ‘Hounded By Callous Decree‘ and on the later track ‘Scarlet Extremities‘ where the Doom laden sludge riffs that were born of a childhood listening to the craft of Iommi are sent crashing into a more classic rock style, but dressed up in a snotty punk attitude. I could be lazy and throw out a comparison to a more expansive Mastodon, but whilst that would be a good starting point, it also does Hark a disservice as in truth, they are have a hell of a lot more to offer than just musically rehashing the likes of ‘Leviathan‘.

‘Black Hole South West‘ is a prime example of this as the slower grinding menace of the track is a darker turn, full of ethereal haunting melodies and chanting multi-layered vocals used to great effect. Also making a reappearance the b-side of the earlier single ‘Sins On Sleeves‘ once again changes the dynamics with it’s bouncing rhythm section and off kilter guitar accents that pulse in weird algorithms and worm their way into your brain. Both these tracks stand out from the already high benchmark being set and are noticeable high points on ‘Crystalline’.

The same can also be said for ‘Mythopoeia‘ – even though I hadn’t played it in advance of this review, as soon as I heard the opening chords my brain remembered the catchy groove, the clash of styles and the impassioned roar. It actually manages to sound better in the context of the album, having built up to it, rather than just diving in cold. It sounds completely at home and compliments the rest of the material by not standing out a country mile either.

There will be lots of talk of the influence of many a diverse band on Isaac, but none probably more special than Clutch. Hark, like his former band, have a kindred spirit with Neil Fallon’s purveyors of Pure Rock Fury and in a fabulous twist of fate through tour support and general admiration the Strange Cousin from the West makes a guest appearance on the album closer ‘Clear Light Of…‘

The song itself is a great winding epic full of complex twists and turns that may take a couple listens to truly appreciate everything that is going on as galloping guitars give way to fret pyrotechnics and dizzying dynamics.

It is an assured piece of technical song writing that moves through moods at a breath taking pace and on top of that Jimbob’s rasp is countered by the throaty roar of Fallon. The two of them enjoy some nice interplay that adds tone and depth and invokes a shamanic fever to the other wordily lyrics and ensure the album ends with standards as high as the opening notes.

Hark‘s debut is impressive; not only because it already sounds like a piece of work recorded by a band of many years experience, but because of the depth of music and the whole approach that they have adopted. On paper it might sound like they have thrown in everything including the kitchen sink, but somehow out of this has come an album that reverently pays homage to old school slabs of metal, adds in a dash of the ultra modern and still retains a soul that dates back to the blues.