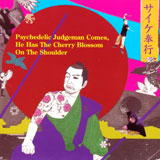 If there’s one band that pretty much defines ‘prolific’, it’s Acid Mothers Temple (Merzbow doesn’t count as there’s a sneaking suspicion that he is actually a complex flesh-coated signal generator of some kind). There are at least 50 offshoot bands out there, and while Kawabata Makoto and Tatsuya Yoshida might have taken the lion’s share of them, long-time bassist and eternal Cosmic Joker Tsuyama Atsushi is no slouch either. Featuring former AMT acolytes Ono Ryoko, Suhara Keizo and himself, as well as drummer Satoshima Nani (who himself has connections to AMT through his work with Kawabata and Mitsuru Tabata), Psyche Bugyo could easily have been one of those projects that got lost amongst the collectors-only pile of incestuous collaborations, but the fact that ‘Psychedelic Judgeman…’ has been seen fit to warrant a re-release should clue the curious in that this is so much more than that.

It’s one of those records that excels in touching upon the vital and atypical touchstones of the 70’s, most notably from the worlds of prog (King Crimson, Pink Floyd and Frank Zappa fans will definitely feel a wry smile forming on their lips when speeding through this) and serial dramas (the title is a reference to folk hero Toyama no Kin-san, while opening track ‘Ore No Abarenbo Shogun’ gives a sly nod to the samurai drama from which it, in part, takes its name) yet it’s neither a loving pastiche nor a half-arsed attempt at nostalgia. Instead, it seeks to harness the manic energy of a decade’s worth of music while infusing it with the drama and stoicism of a genre which many listeners will doubtless find alien to them, with the results being surprisingly accessible to anyone with ears.

Opener ‘Ore No Abarenbo Shogun’ (“My Bold Shogun”, I believe) is high-energy prog-psych that borders on jazz fusion, a knockabout feast of boisterous synth and squealing saxophone where guitars careen unpredictably and Tsuyama serves as a high-fallutin’ narrator of sorts. It’s here that the Crimson spirit can most firmly be felt, in the coalescing chaos and the steady train of energy that propels it, never giving up on a good groove even if the world seems to be going off in fireworks all around it.

The four-part ‘Psychedelic Judgeman Suite’ comes next, providing the backbone of this album and despite its length and myriad focal points, it’s a surprisingly effortless listen. The noisy, spoken-word-accompanied intro and hazy, tripped-out middle section (think Wish You Were Here-era Floyd) provides ample mind-fuck material, Tsuyama’s twisted invocation of Jim Morrison and eerie laugh all backed up by a blissfully soulful sax/guitar combo before the whole thing takes a manic, funkedelic upturn and shit gets real, real fast.

The expert structuring and even flow notwithstanding, what is most notable is that this is a wonderful exercise in dexterity. Ryoko’s sax turn on part three is exquisitely chilled, a melodic and restrained effort that contrasts sharply with her explosive work one ‘Ore No…’, Tsuyama’s voice is gifted with a laid-back melodicism and Ryota Nishi’s keyboard work on the earlier passages is as brisk and invigorating as a MDMA-doped bumblebee and just as unpredictable. You can expect session musicians to have a good standard of all-round performance but for the players here, it’s more a loving embrace of every sound conceivable and as such the half-hour runtime is just a blast.

Closer ‘Son Of Mr. Livingwillow’ might well be the album’s shining moment, though. Catchy as hell, not just for the breezy acid-folk melody that lies at its core, or the delicious guitar solo, or for Ryoko’s switch to flute exertions; it’s just that, more than anything on offer, this captures a period better than anything. It practically smells like an early 70’s summer. It’s carefree, sensual and charming, and if there’s any nostalgia here, it’s more for a feeling long past than a sound.

In many ways, it helps not to view ‘Psychedelic Judgeman…’ as an album itself, but rather as a soundtrack. The funkier, more upbeat passages give the album a grainy, low-budget exploitation vibe, so it’s not inconceivable that this could have been the soundtrack for some seedy pinky violence classic, a Technicolor riot of sex, blood and all-round excess. It’s an album that’s not only notable for the exceptional musicianship on show, or for the seamless manner in which it can segue from blues to free-form jazz to overt freakouts in a single track without losing the listener along the way, but mostly that it’s just great fun to kick back to. 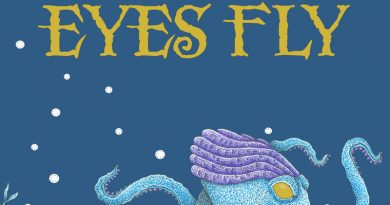