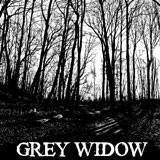 Under their “About” section on Facebook, Grey Widow have listed their interests as “Worship nothing, follow no one, destroy everything.” This is appropriate, as the self-described “nihilistic sludge blackened noise” four-piece seem to emanate sheer hatred and crushing animosity with each note that thunders from their instruments. The presentation on their 2014 debut album is aptly stark; the title is simply ‘I‘, and the track names are minimalist (I, II, III, IV, etc.). The albums cover shows a barren forest. The trees are black and empty, the ground is black, there is nothing here but death and decay. Rarely has the “sludge” label felt more proper. Grey Widow is heavy, thick, and putrid. They relentlessly attack the listener’s senses, and leave you feeling the need for a blood transfusion to clear out all of the motor oil in your veins. At times it almost feels as if this band truly hates you.

The first track immediately conveys a sense of dread and hopelessness. With dirty, low tones the guitar warns you of the impending doom, delivering a slow progression of dissonance and fear inducing growls. Maintaining this steady, plodding pace, the song quickly becomes enormous when the drums crash down upon you and pained, gravelly vocals begin to yell, shriek and wail. Pain, oppression, anger. ‘II‘ continues along this path, offering a brief reprieve from all of this despair in the form of fuzz-laden feedback, before quickly becoming another pulverizing beast. The beast is massive, terrifying, a creature of pure evil, and there is no escaping it. The guitars adopt an almost playful groove, but there is no joy, as they simply seem to be taunting the listener, dangling despair before your ears. The vocals are consistently vicious, dripping with brutality and aggression. As ‘III‘ begins the rhythm section leads with a steady drumbeat full of splashing cymbals and cracking snare hits, while the bass lays groundwork for another raging riff. Once the guitars and vocals chime in, this becomes the most pummeling song yet, with borderline hardcore vocals that, by the tracks last minutes, give way to blood curdling shrieks of pain and torment.

‘IV‘ opens with the blackest moment of the album thus far. Blast beats and more shrill screeching lead the assault while tremolo picked guitars serenade what one imagines the descent into hell would sound like. The tone briefly shifts from this maddening chaos, returning to the heavy sludge already presented, but the sound is now at its most oppressive and hateful yet. There is nowhere to run to, nowhere to hide from Grey Widow’s wrath. At this point I’m not sure if I should be charging forth alongside them, or cowering before them. Either way, there is little here for anyone on the fence about their enjoyment of Doom/Sludge music. There are no moments of softness. This band has crafted a work of consistent, unrelenting spite and loathing.

The second half of the album offers a precious few extra moments to breathe, such as more drawn out, feedback-drenched pauses, but the force and weight that is felt upon the band’s return to full volume seems even heavier than before, if that’s possible. There isn’t any variety here in terms of tone or mood, the songs are consistently heavy, violent, and angry. What they lack in diversity, they make up for in quality. If you’re looking for an eardrum-bursting album full of “Nihilistic putrid fucking hatred”(their own words), then look no further. Here are eight songs that could easily represent the new standard for such music. The sludge is thick and oozing, the doom is groovy and heavy, and the black is relentless and hateful.