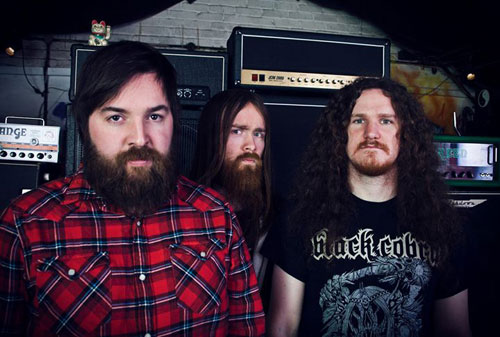 Wolfshead’s digitally released discography boasts a diverse range executed with surgical precision, a rare accomplishment for a band less than two years old. Tracks such as ‘Warbringer’ offer little more than two minutes of groove laden, stomp-a-long stoner ferocity. This is the kind of dastardly whiskey-drenched doom I imagine as the soundtrack when Red Fang decimate The B-Side Tavern’s supplies of PBR at a homecoming drinkathon.

‘Sword of Fire’, the band’s most recent single, weighs in at the other end of the spectrum. Here Wolfshead exhibit an approach akin to an unholy union between the beast slaying brutality of High on Fire and the unrelenting colossus that is The Sword.

Make sure you’re one of the bodies left behind by Wolfshead at The DesertFest this year.