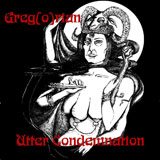 Greg(o)rian are London’s initiate into the realms of blackened drone doom horrors, and their new EP, ‘Utter Condemnation’, free from their Bandcamp page, is 24 minutes of menacing, almost tribal drumming and rumbling threat.

From the beginning, ‘Utter Condemnation’ creates a mood; a base from which to layer upon more subtle levels. From the tribalistic drumming to the three notes plucked from the gloom, and the whispered roar that instils fear, the opening five minutes is a hypnotic dirge. Drone doom is one of these genres that works with sound, rather than music. Greg(o)rian have created a simplistic bottom layer to their song, and build from it.

Cymbals begin to crash over the rumble, the whispering screams become louder and more urgent, but there is no sharp release. Greg(o)rian is still building that construct for us, brick by sullied brick. A change in melody and direction lead, not to the light but further to the darkness. There’s something eerily eastern about the guitar melody that creates the higher notes of the piece. There are a few sections where the melody changes, but these three notes are the backbone of the song.

What’s striking about this release is the pace of it. Sure, it may never be considered ‘Reign In Blood’ speed, but for a drone doom band Greg(o)rian appears to move quicker than their peers. After a brief lull in the proceedings, ‘Utter Condemnation’ returns to the tribal beat. The vocals sound great, as if they are passing through a cloud of mist and fog. There is nothing particularly exciting about this whole affair, but there is definitely something here for people to fixate upon. The band approach the close of the track with a swaggering groove, vastly different from the simplistic cyclical main riff.

‘Utter Condemnation’ feels like the long slow march to the grave. Relentless, unending and hypnotic in its monotony. Sure, the band have produced better work (‘Dormancy Of Our Omniscient Masters’ being a particular highlight), but as a place to introduce yourself to what Greg(o)rian do, you could do worse than ‘Utter Condemnation’. A solid if uninspiring EP, from a band who are very capable of doing more.