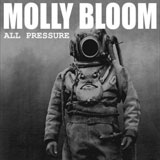 Describing something as ‘unique,’ in this foul age of superficial nothingness, should provoke at best, dismissive shirking and accusations of delusion; so to spare any such reaction this early, it is a rare thing that an album such as Molly Bloom’s ‘All Pressure’ sees the light of day. Defining their sound is not simple, though the binding factor is something unhinged; a mad house collaboration that seems to make sense.

The album fires up with chords of psychopathic folk-jiggery torn from Tyrion Moses’s classical acoustic soon joined by viscous percussion with tightly following relentless thumping bass lines, and lively flute. The vibe is best described as manic. I hate dancing in, yet I find myself hopping around my boiling Maris Pipers between these lines like a potato worshiping shaman. Limbs let loose without even slightly feigning good times, though I suspect traces of it are more sinister, like the feelings of those feral children on an island’s cliff edge, poking their overweight ex class to the jagged rocks below. At the very least there is a relief of inhibitions.

Punk and Metal elements run through the songs; more in some than others, but they never become too overt. The guitar is complimented by classical virtuosity and finger picking while the flute brings energetic liveliness or subtle changes to the mood of tracks. The percussion is often intense, like the apex of a Bill Ward track while the bass provides prominent crawling depth that could be the soundtrack of a gargantuan spider making its way across your wall. I won’t provide a list of the influences that occur through varying songs, because it will make the album sound like some experimental car crash rather than what it is, but there is a spine of anarchic menace stemming from it. Acoustic tracks such a the self titled ‘Molly Bloom’ have a stomach warming darkness to them; and guitar wise sound like something Jon Nodviedt might have written.

Steve Dundon combines themes of everyday madness with the bizarre; never too far from destruction. A strong singing voice is utilized, though the vocals are frequently rasped, shouted and spat to emphasise these themes. The versatility is necessary. ‘Come Creeping’ is a song that starts with eerie guitar, lead out in to some dark recess by flute into doom and disparity, turning over the other side becoming up-beat; the change instigated from some very satisfying guitar parts.

There is a festival in a town called Ramsbottom, from which black pudding originates: Every year a truly weird social phenomenon occurs where locals hurl black puddings at Yorkshire puddings. Molly Bloom played at the event for years, while not-rights from near and far would gather round and do strange things; like meditate at the front, or try to get on stage and mime Harmonica to the likes of ‘Mistress Winter’ while black puddings flew through the grey sky. Everyone would lose their shit to some extent. Even though the band rightly moved on to far better things, I still associate them with that kind of oddity, because I don’t think this music could have come from anywhere else.

Unless your blood runs cold I suggest you buy what I consider to be one of the most exciting things I’ve heard for some time. 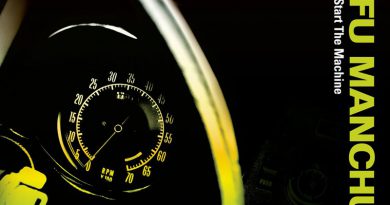 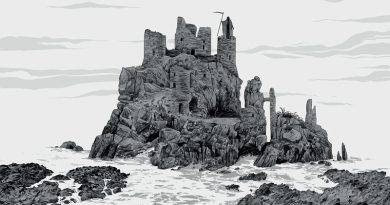