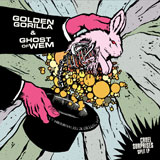 This split EP from Per Koro and Meta Matter Records is a heavyweight collision of Sludge/Doom and Hardcore that looks to grab you by the collar and get up in your face with nasty, spiteful tunes determined to trample any unbelievers in their way.

Split between the more direct Golden Gorilla and the crawling Black Metal influenced Ghost Of Wem, Cruel Surprises doesn’t necessarily deliver much on the surprise front but it does give the listener six tracks and just under forty minutes of uncompromising, brutal music.

Released on limited runs of standard and heavy weight transparent vinyl this is a dream for anyone who likes their music bleak, nihilistic and savage.

First up with the lion’s share of the tracks (four in total) are Darmstadt Germany’s Golden Gorilla who have been kicking around since 2001, disappearing for a brief hiatus in 2010 but are back now to make the kind of music that would be the soundtrack to annihilation. R.E.M might have felt fine at the end of the world as we know it, but Golden Gorilla are fucking fuming.

When you describe your frontman’s job as ‘screams’ then you are laying your cards on the table to say ‘this is what we do’ and after the drama of the ominous intro that morphs into crisp, clean production they go for the jugular with No Sleep In Ruins. The band they are most likely to be compared to is of course EyeHateGod, they share the same Doom/Sludge/Hardcore hybrid style as the NOLA sluggers and the low end chugging riffs are topped with rasping, strangled vocals that spit venom with conviction.

Paranoia Run continues the deep, rich Southern Sludge styling’s that hit with pace whereas Teeth In The Pocket showcases a slower, doomier side to the band that has a similar feel to departed British sonic terrorists Iron Monkey with their slabs of slowed pace, heavy Sabbath sound and gargled vocals.

The three tracks walk the line between the full tilt hardcore style madness that shrieks and rages and the more measured, almost brooding and bleak pulsing. Downbeat and utterly seething with its inhospitable nature, this is indeed dark music for dark times as the band look to channel their rage into cathartic release.

Track 4 however, Endlosrille, is complete bollocks. A 1.41 piece of sampled noise garbage that breaks up the serious music between the two bands.

I appreciate it was put there to irritate or be light hearted but in reality Golden Gorilla and Ghost Of Wem sound about as similar as two utterly dissimilar things.

Release it on vinyl and have one on each side, separate them by name on your iTunes library, whatever, as I am sorry to say guys that was just an unnecessary piece of shit after a good start.

Ghost Of Wem also hail from Germany, and have a pedigree which includes members of Black Shape Of Nexus, Scheissediebullen and Diavolo Rosso which means that they are no strangers to playing desolate, unrelenting music with more than a measured degree of intensity.

Despite only having two tracks, their contribution clocks in at an impressive 17 minutes, which should tell you everything you need to know about the sloth like Blackened Doom that they bring to the EP. First track (Cut the Head off) Leave The Silence is a massive piece of ringing, slow paced fuzz with snarling, high pitched shrieks. The music is grimy and grinding as the bass courtesy of ‘S’ (all the band members are simply credited with what I can only assume is an initial) rumbles with decent production designed to make the music sound like it should leave you needing a wash.

It is as epic as it’s run time would suggest, setting the plodding atmosphere before breaking down into a drawn out middle section and then going for a churning speed rush at the end with ‘D’ sounding like a mad man howling his head off over the guitar runs.

Control Entity is even longer and walks the line at times between Doom and Drone experimentation before letting themselves off the leash again. By far the most savage thing on the EP, the closing track just screams (literally) intensity, mingling the high pitched vocals with a death metal influenced bellowing roar that at times leaves you exhausted from the unrelenting, bleak fury of it all.

‘J’ on drums stands out on Control Entity for being at the heart of everything, speeding and slowly the tempo, battering his kit like hell hounds were on his trail; the sheer stamina required for the closing minutes of the song is breath taking and it is almost brings a sense of relief when the track slumps into feedback at the end.

Ultimately neither band are reinventing any wheels, as I hinted at earlier, Cruel Surprises won’t make you reassess your view on the genre. Both bands have a blackened take on what they do that adds an extra layer of nastiness that helps them stand out from other bands they rub shoulders with and gives them a common thread that makes this split work so well.

Given the members of the bands, it is no surprise that they deliver on the atmosphere and intensity and this release is a great advert for two of Germany’s most promising extreme bands.

Hopefully they can build on this momentum and we can see a full length release from them both soon.

Atomic Cries ‘For Those Who Came Before Us’ CS/Digital 2012