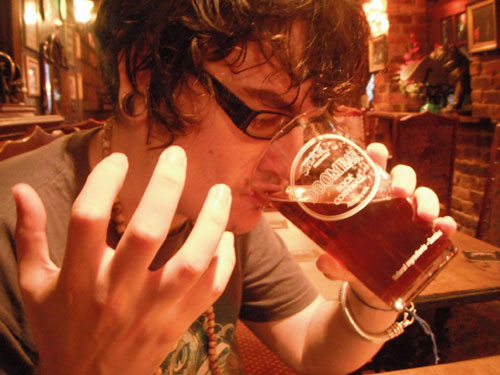 I’ll admit it right off the bat – I’m shite at these things. I’m either completely predictable and return to old favourites, or I’m easily swayed and love everything and everyone. This year, I did both. Bands I love have released some bloody great albums, ones that I used to love have inexplicably become brilliant again and there’s been a few new treats that have taken me out of my comfort zone. I’ve missed a ton, I know, and over the course of writing this I remembered about a dozen more that I could/should have included, but I’m sure someone else’ll pick up the slack for me. Right, now that’s out of the way…

Anaal Nathrakh ‘Desideratum’
Absolutely face-melting industrial black/death metal that out-extremes pretty much everything else to come out this year.

The Body ‘I Shall Die Here’
Still as terrifying as ever but The Haxan Cloak’s presence lends it a strangely alien vibe. Like watching a Replicant’s skull being caved in with a claw hammer in slow motion.

Boris ‘Noise’
Pretty much everything that’s great about Boris summed up in one neat package, plus some pretty heady My Bloody Valentine and Ride worship in there as well. Easily their best record since …Mabuta No Ura.

Earth ‘Primitive & Deadly’
It’s Earth, but with vocals and song n’ stuff, innit? Actually, it’s a whole lot more, and I can’t remember the last time Carlson & co. made an album that sounded as full and as rewarding as this.

Electric Wizard ‘Time To Die’
A Satan-worshipping, glue-sniffing, amp-blowing bad trip of an album, this is doom at its most trashily evil.

Goat ‘Commune’
This was always going to be good, but the funky vibes and concentration on crafting great songs rather than one long, hedonistic party vibe replaced World Music as my dancing-like-a-goon-in-my-office album.

Godflesh ‘A World Lit Only By Fire’
Ferocious and oppressive from beginning to end, this hulking, rust-caked monster was more than worth the wait.

Ides Of Gemini ‘Old World New Wave’
A treat for the ears and for the soul. And the riffs! Oh God, the riffs…

Krieg ‘Transient’
A modern black metal gem clad in the ragged cloak of its 90s forefathers, piling on the blastbeats and misanthropy while remaining deceptively accessible.

Mastodon ‘Once More ‘Round The Sun’
One of the biggest bands in the world get bigger, smarter and catchier. Between the hooks and the sharp production, though, there’s still enough meat on its bones that even the Leviathan crowd won’t feel too left out.

Menace Ruine ‘Venus Armata’
A choking fog of incense enshrouds this oddity, a quasi-religious slice of industrial drone that sounds like it should have been released five centuries ago. I still get chills listening to this.

Mono ‘The Last Dawn / Rays Of Darkness’
Cheating a bit here, but these albums reflect both sides of one of the few post-rock bands to have lasted the distance. Beautifully tragic on one hand, sonically overpowering on the other, they are an inseparable pair.

Mope ‘Mope’
Doomjazz operating at its most literal. Eerie midnight sax workouts, riffs that hammer down like the Hindenburg and a streak of lush, Morricone-esque cinematic flair; this is the music of cities, of alleyways and empty streets, and it’s a fantastic debut to boot.

Psalm Zero ‘The Drain’
Industrial? Post-punk? Chamber music? Grind? It’s all of the above, and nothing like any of them. It flips between an almost religious sense of grandiosity and punishing technical chaos, but in the same way that Corrections House just works, so does this.

Sabbath Assembly ‘Quaternity’
It takes a special band to cram bacchanalian folk, Satanic doom and a marathon prog workout into forty minutes and leave you wanting more but by Jehova, they did it.

Sunn O))) & Ulver ‘Terrestrials’
Scott O))) might have gotten all the press, but this was O’Malley’s high point this year. Deeply disquieting ripples of subsonic devotion and amplifier worship ov thee highest order. 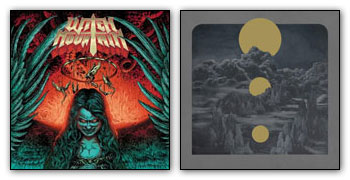 Witch Mountain ‘Mobile Of Angels’
Southern soul, heartbreak and monolithic doom collide on what has ended up being a bittersweet end of an era for the band.

Yob ‘Clearing The Path To Ascend’
“Time to wake up”, Yob always sounded like they were heading for something huge, and this beast of an album was certainly it.

I genuinely could’ve chucked in twenty more, so I’ll mebbe throw in a wee mention for the rest here, like At The Gates’ return to the land of metal with At War With Reality, as well as solid new albums from Behemoth, Bo Ningen, Blut Aus Nord, Manes and Mayhem . On the reissue front, there was the long-overdue Trolsk Sortmetall box from Ulver, plus Echo Of Miles, a most excellent collection of Soundgarden rarities. Very special props go to True Detective for its awesome soundtrack (Townes Van Zandt? Sleep? Wu-Tang Clan? Fuckin’ hell!) and The Knick’s synth-heavy score from Cliff Martinez.

I tried to keep the above list largely catered towards the kind of albums people reading this might conceivably want to pick up, but I thought I’d add a little addendum for anyone curious about the other, less overtly weighty stuff that caught my eye, namely…

Katy B ‘Little Red’
A proper little dancefloor treat. Soul, pop, dubstep and 90s house in perfect harmony, it’s less immediate than her debut but with time it’s revealed itself to be a real step-up in every sense.

Aphex Twin ‘Syro’
The anti-Little Red. More readily accessible than most of his later work, this is still an odd and intricate work that reveals more with each listen.

Babymetal ‘Babymetal’
Possibly my most-listened-to release of the year. I have an unashamed love of J-pop so perhaps that’s why I took to it so easily but with its great hooks, innovation and relentless energy, I probably would have been sold no matter what.

Temples Festival @ Motion, Bristol
Pretty obvious, really. Great location and staff, the sound was spot-on for pretty much every performance, and with bands like Neurosis, Jucifer, Blood Ceremony, Wolfbrigade and Sonance, the first Temples Festival was the definition of setting off on the right foot.

Multipletap @ Café OTO, London
Going for another festival is cheap, I know, but this was a great showcase of everything Japan has to offer, from traditional (gidayu-shamisen master Yumiko Tanaka) and performance art (shibari performer and AV actress Miho Wakabayashi) to noise (one-man master of sonic mindfuckery Pain Jerk) and, erm, other (idol pop/guitar freakout mashup Hatsune Kaidan).

Helmet @ Cathouse, Glasgow
If playing Betty in its entirety wasn’t enough for this gig to be a classic, a full performance of Meantime (to make up for a cancelled show two years ago) and a hefty encore certainly was.

Tim Hecker & Merzbow/Gustafsson/Pandi Trio @ Oval Space, London
One of the smartest, sharpest and most devastatingly effective free-noise/jazz performances I’ve ever witnessed, and Hecker operating at his most visceral. Absolute bliss.

Goat @ SWG3, Glasgow
Ecstatic, danceable and completely unrestrained, this might have been the most exciting show of the year for me.

Well, that’s it for this year. Many thanks to Lee at zee Shaman for running such a great site, all the great writers and staff at Rock-A-Rolla Magazine, Music&Riots Magazine and The List, Lauren @ Rarely Unable, Chris @ Profound Lore, Rachel @ Silver PR, Pip @ Relapse, Francis @ Temples, Katsuyoshi-san @ MultipleTap, and to all the awesome people who sorted me out with promos, answered my tedious interview questions and actually read the dross I regularly put out. You’re all bloody saints, so cheers.