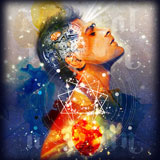 You know, being a reviewer definitely has it upsides. I get to sit here and listen to loads of new music from tons of different bands and get my musical horizons broadened on a daily basis. I also have the added benefit of perhaps the most relaxed and easy going editor known to man. But there is a flip side to it. No, really. While I get to listen to music I like, I also get to listen to music I don’t like quite so much, and no matter what I personally think about everything I listen to I try and find as much that is positive about it and convey that to you. No matter if I love it or think it complete bilge, I know that my taste is a very (very) subjective thing and I have a duty not to let that try and get in the way of telling you about what I’ve been listening to, along with how and why someone out there might like it. Sometimes the words come out easily, other times it can be really hard to get anything out at all.

Did I manage to get your sympathy? No, I thought not.

Take ‘Aeonian’ by Ethereal Riffian for instance. They’re a four piece from Kiev, with a line up comprised of Stonezilla (aka Val Kornev on guitar & vocals), Southman (Max Yuhimenko on guitar), Saf (Alexander Kornev on bass) and Ship (Nikita Shipovskoi on drums). ‘Aeonian’ is a concept album of only four tracks that has been released as a digital download, CD and two flavours of mixed media release which includes an accompanying book, badge, sticker and packaging.

Ethereal Riffian profess to ‘expand the frames of the listener’s musical perception and to shed light on the existence of a subtler plane’ along with other equally grand claims. And I‘ve got to say that this has been one of those reviews that has been incredibly difficult for me to put pen to paper over.

Why? I hear you ask. Is it really that bad?

Oh good god no, get such thoughts out of your mind. ‘Aeonian’ is amazing. Truly, staggeringly, colossally, mind blowingly amazing. The problem I have is that every time I play it, I have to stop everything else that I am doing in order to give it the full attention it deserves. I can’t possibly write when it’s playing, that would be doing this music a disservice, even if it is to try and express to you the enormity that is contained in this release.

‘Thugdam (Sensation)’ opens with a powerful punch. And it only takes a couple of seconds to realise that this is something very special indeed. This sounds absolutely massive. It smacks you with a huge, fast paced riff for a while and then Stonezilla’s vocals start. They seem strangely at odds with the urgent pace of the song; they’re delivered almost in a doomy slow monotone, while the sound of the guitars and the riff seem more metal than doom. And it works brilliantly. The vocals have a kind of monastic, mesmeric chanting feel to them and seem to be more like another instrument in the band, rather than just someone singing along with some other musicians. The track evolves over the course of just over seven and a half minutes, changing from the fast opening to a slower and more plodding feel that climbs into a pounding crescendo that gently fades out and seamlessly moves into ‘March Of Spritu (Rise Of Sheol)’. This starts with a low bass line that rolls along as layers of drums and guitar gently join in until another monumental riff hits like a brick wall of noise. It’s another pounding riff that picks up pace about midway through and gets heavier and heavier before it reprises the bass line and thumping riff. All the way through the track, the higher pitched lead guitar and low vocals working in concert to keep adding extra depth and atmosphere.

‘Wakan Tanka (Awareness)’, by contrast, has a much lighter feeling intro. With a clean sounding bass and guitar that is joined by a didgeridoo that once again slowly build into another wall of riff. The vocals, still in that low tone, have a much more percussive feel as they seem to keep time with the rhythm section before the whole thing drops back to a single bass line, and promptly explodes into alternating crushing riffs and truly heroic guitar solos. A pair of guitars wailing in harmony plays the track out and dreamily sweeps into Anatman (Oneness). Another clean sounding intro of bass, guitar and flute which serves as a counterpoint to the enormous crushing riff that inevitably follows. The combination of lead guitar and hypnotic vocals again add a sense of enormity while it picks up speed and power, before descending into a captivating long gentle outro to the whole album.

From start to finish, ‘Aeonian’ is huge. It’s not a great stretch of the imagination to see how much time, effort and thought have gone into producing such a beautifully polished item. And if the music is anything at all to go by, the mixed media releases must really be something amazing.