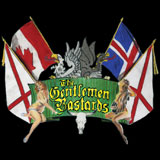 The first thing that drew me to The Gentlemen Bastards was the name, which is also the name of one of my favourite book series that also goes by the name of Gentleman Bastards. So my curiosity was immediately peaked and I checked out the album. I was instantaneously sucked in by what I like to describe as red neck rock. The type of rock music that makes you want to shoot a crate of beer, crawl home, fuck the wife and fall asleep under your truck with your favourite dog skeeter.

The self-titled album starts off nicely with ‘Neverland’ and also my favourite track on the album, we have a perfectly blended heavy rock with some pretty decent lyrics. The chorus is infectious and contains probably the most epic guitar solo of the whole album, extremely reminiscent of Rival Schools dirty Seattle sound.

We follow ‘Neverland’ with ‘Last Rites’ which has more of a 70s rock feeling to it. The vocals themselves also seem to sound lighter than ‘Neverland’. Everything falls into place leaving a song that makes you think of a harder and heavier Led Zeppelin.

Next up we rock into ‘Motorcycle Song’ which really does give you that feeling of riding down a long dusty road in the middle of America with no-one to get in your way. No helmet, wind in your hair and the late afternoon sun beating down on your face. Following this is ‘Deja Vu’ which is great, I love this track, it’s perfectly named because you’ll feel yourself singing along to it over and over again.

Sadly ‘Take A Ride’ is a bit of a bland track, it doesn’t seem to go anywhere, but luckily it’s followed by ‘NMR’ which does make me want to go for a ride. Track 6 ‘NMR’ is the type of track accidents are made of. Immediately when listening to this I could imagine myself kicking out silly speeds down the highway. Obviously I wouldn’t do something so stupid though, well not admittedly anyway.

‘Good Intentions’ is an alright song, you’ll find yourself singing along to it but it sadly has too many similarities to some old classics. It’s like eating fake meat, it tastes alright but you’ve had something better before.

However we follow ‘Good Intentions’ with ‘If Only’, it’s nothing to write home about but it is a great rock track. It doesn’t try to be anything special and lyrically it’s pretty damn sound. You’ll find yourself associating with the lyrics for certain. So just sit back and enjoy this one.

The penultimate track is ‘Big Bad Wolf’ which I really didn’t like at first, or second, or third or whatever, but it took me a while to like this one. It’s a pretty epic track though at 7 minutes long and has some similarities for me to ‘War Pigs’ by Black Sabbath. It’s a track that will grow on you for sure.

Lastly we have ‘Start The Show’ a seemingly weird track name for the last song on the album, but it does have the epic riffs of a last track. Good vocals and all out balls to the wall instruments to satisfy you enough.

All in all it’s an edgy album, hard power chords infused with similarly rough vocals, not rough in the sense you’ve just woken up in a dumpster with a homeless guy licking your face, but rough where you’ve had your eardrums bashed in at a local club because you stood too close to the speakers. It hurts, but it’s worth the pain and it feels so good in the end you just don’t give a shit.

I am however a bit disappointed in the production on this one though. It’s hard to determine if the poor production is part and parcel with the music or simply bad production. It seems to have a softness to it, no matter whether I’m listening through my system at home or my headphones I still get this same muffled sound. It doesn’t matter so much on the instruments but it really fucks the vocals in places. It won’t ruin your day but if you’re trying to get a taste of the lyrics then you’re gonna have to focus hard to figure out what’s going on. Although the low production does add to the value of making you feel like this is just a bunch of guys rocking out in their garage in Alabama, you can almost taste the moonshine.

So if you like bands such as Audioslave, QOTSA, Quicksand, Faith No More then you’ll enjoy the album. You can certainly hear the traits of good old British heavy metal in most of the songs. Other than that the album is definitely good riding or driving music, perfect for a blast out, if nothing else I’d recommend it for that.