As we get into the weeds of 2022, attention turns to end-of-year reviews and how this one has stacked up. Having written many articles since the global events that unfolded in earlier 2020, many of those had some kind of comment on the pandemic, lockdowns and the impact on people, bands and music in general.

Right on cue comes the latest release from Australian experimental doom/stoner crew DEAD to remind us that COVID-19 has cast a long shadow on our lives and the industry. The Laughing Shadow is an ambitious and complex instrumental track that spans forty minutes running time; divided into eight movements, the conception and recording of which was done during their own period of personal uncertainty and reflects the feelings and experience of the time.

In a break from their previous output, the duo of Jace (bass) and Jem (drums) eschewed the use of vocals and instead recruited guest musician Jenny Divers on saxophone which lends the proceedings otherworldly and serene feelings, creating a dense atmosphere that will mark a radical departure for existing fans, while capturing the alien feeling of isolation and sadness.

Written, performed and recorded in one take, live in a barn in Campbells Creek with the members distanced and masked, devoid of any personal contact, what you hear is a moment in time, echoing in the space, pulling you into that edgy and uncertain period.

The album itself is an unfettered piece of prog inspired, multi-faceted art that attempts to draw material from previous writing sessions (the oldest material has its roots from before DEAD were actually formed) and the band used their own perspective to create a long form piece of music that, for the necessity of the vinyl pressing, has a Part A and Part B, but is intended to be consumed as a singular experience.

Backdropped by anxiety, personal anguish, painful loss of loved ones and the uncertainty surrounding the state of isolation, The Laughing Shadow is a profound study in the use of art to convey, in this case without words (which, in itself, can be seen as a commentary on some of the social conventions that have emerged in the past two years), the underlying expression of the human experience.

With these weighty considerations, it is no surprise that the album begins with The Cowboy’s slow menace. Bass rich in tone and plodding with pounding toms, there is a stately feel to the movement, or at least the epic sense of a journey, like a lone figure tracking through hot and dusty land on horseback. Despite the grandiose setting, there is a sense of claustrophobia in the thick sounding composition. The band spoke of how they imagined there was an orchestra in the sessions, and the swell of the saxophone as it weaves and intertwines with the guitar lends the feel of a spaghetti western score.

The next movement, Riding Shadows, expands on the sense of drama and heightens the powerful interplay between Drivers saxophone and the duo giving loud moments verses disconcerting string bends and quiet picked guitar before the brisk, taught military like drumming of the third movement Death.

Morphing from intense focus, the next part of the track grows from a funeral procession to a jazz inflected swing that would be more associated with New Orleans. The loosening of feeling could track to some of the real-life experiences that saw traditional social gatherings, and even funerals, becoming forbidden events. This climaxes with Driver noodling on the sax, alone and stark after the power that has gone before that segues into the quiet lament of Light, Flicker, Dark that concludes the first half of the composition.

Part B begins with Disgraced Former Detective and the mood darkens from the previous western feel. Awash with reverb and long ringing notes, the section calls back to the beginning, but somehow more insistent. The tom hits nag at you like something is wrong; the moments of isolated instruments stark and mournful before the thunderous climax returns the band at full power, hard of edge and crushing you under the weighty gravitas.

The unsettling turn continues as The Cracking Façade cranks the tension further. Like the sound of a mechanical system breaking down (drawing parallels to society and social structures crumbling around them perhaps?), littered with industrial clanking and scraping as the more traditional instruments push the movement onwards and growing in stature to end with a cavernous sound, like the breaking of a storm, as it cuts to a delicate, folk like picked guitar.

Bastard Return is as dramatic as the title suggests. Almost like the eponymous Black Sabbath track, it crashes and echoes with doom and dread, suffocating the calm that preceded it. Still present are the samples and scrapes. If the band had decided to put vocals to this, you can only picture them as tortured howls, before the band ease into the final part, the titular The Laughing Shadow.

Ending with a more up-tempo passage, DEAD finish off with a powerful, direct and urgent frenzy. As The Laughing Shadow builds it becomes a tumultuous piece of high intensity doom. The saxophone has now been relegated to part of the ensemble, rather than dominating, and the guitars squeal in pain, grinding with that industrial flavoured anguish before the band put their heads down and end on a glorious instrumental run.

There is no doubt this latest effort from the Australians is easily their most challenging to date. Born from extraordinary circumstances, DEAD have created a piece of work that draws from many diverse influences and demands your attention.

Creating something like this, a continual piece of music that shifts with moods, rather than defined breaks, is challenging and probably won’t tick the box for everyone, but for those of a mind to sit and absorb, letting it flow over them, The Laughing Shadow is well worth your time. 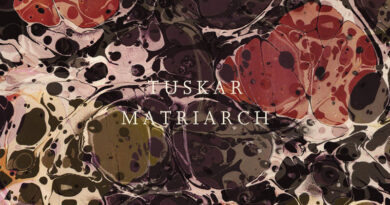