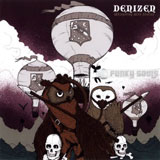 France’s Denizen bring us ‘Whispering Wild Stories’, their third album since forming in 2003 and I won’t lie, it’s a good old-fashioned beer-fuelled rampage through your brain. Denizen have combined the vibe and rhythmic groove of great seventies bands including Black Sabbath, Cream and even Led Zeppelin with the uncompromising, steamrolling force of hardcore punk to awesome effect. Peppered throughout the album you can hear some Fu Manchu in the band’s sound – perhaps in how carefree it all seems to be; there’s a kind of reckless abandon to the whole affair that’s really quite refreshing. From the opening war-cry of singer Fabien Aletto on “Casino Royale” to his final grunt on album closer “Walking on a Treadmill” Denizen let loose like a bunch of drunken motherfuckers from hell armed with a Cry Baby and a high fever.

Denizen, crazy bastards that they are, even whip their balls out and attempt a cover of rock n’ roll standard and ‘first-thing-that-many-guitarists-learn-on-guitar’ “Sunshine of Your Love”. Like I say, it’s a ballsy move that will either show-off a band’s interpretive skills or highlight how much they suck compared to the band they’re covering. Fortunately the song lends itself to Denizen’s brand of unadulterated punk swagger and their balls come away unscathed. And to be fair to the guys, they definitely make the song their own even if, as many would predict, it is the most memorable riff on the album. And therein lays the problem with ‘Whispering Wild Stories’.

Denizen are not the kind of band that can stand up to much scrutiny; you could definitely say that their songs are pretty one-dimensional and similar to one another. If you were to ask me to distinguish one song from the next it would be pretty hard to do, which is especially disappointing considering there are only eight songs on the album (and one of those is a cover). The riffs are all cool, but they sound like they are all slight variations on one almighty badass riff, endlessly emulated throughout the album. Also, the pace very rarely strays from an up-tempo, punk thrash. It’s a bit of a harsh criticism to throw at a self-proclaimed hardcore band but perhaps a few momentary changes in tempo would give more impact to their unrelenting onslaught. “Your Own Nightmare” is a notable exception – when the song slows down to a “War Pigs”-like groove my head starts banging involuntarily.

I read another review of this album somewhere that suggested that Fabien’s singing-style on ‘Whispering Wild Stories’ is more melodic than on Denizen’s previous material. If that’s the case then on the previous recordings Fabien must have sounded like a feral pig grunting into the microphone because throughout the album he maintains what can only be described as a guttural, almost-at-breaking-point caterwaul. This is made all the more apparent when he attempts to sing somewhat melodically on “Sunshine of Your Love.” It’s pretty awesome and on the tenth listening of the album it becomes apparent that a large part of Denizen’s charm lies in the voice carrying the songs along, with its stubborn refusal to sing anything approaching an ‘in-tune’ melody.

So, Denizen pretty much do one thing but luckily they do it damn well. If you’re looking for a groovy, punky party album with a heavy seventies feel then you could do far worse than grabbing a copy of ‘Whispering Wild Stories’; the perfect soundtrack for riding one of the Four Horsemen of the Apocalypse through a ring of fire… drunk. 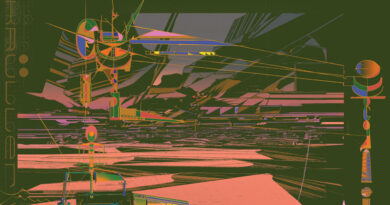 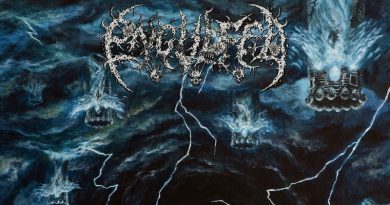 Review: Engulfed ‘Vengeance Of The Fallen’