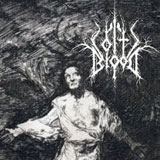 This self released demo of filthy black metal tinged sludge doom goodness by Coltsblood had me hooked instantly through my sweaty headphones on a summer’s eve even though it evokes visions of the dark lurking in the shadows on a winter’s night rather than mid solstice just to unsettle the listener.

Two tracks are present that change and twist and take on different forms as they go on. Abyss of Aching Insanity, the first track is an endless black hole of a song and as you think it’s going one way it shape shifts into another beast; as the gut wrenching rumble of the bass from John kicks in with his other worldly vocals, that sit perfectly .All held together with Steve’s drumming which is solid but not precise, it sounds organic as though the drums are living/breathing with the echo of the bass tones. What I do love on this track is Jem’s guitars especially with the solo’s that go off on a tangent, it reminds me of a very beefed up early Norwegian black metal sound but for this we have real instruments age!

Doomed is the listener on Beneath Black Skies, much more doom sounding and a tad more up-tempo (if a snails death pace is fast!). John’s vocals take more of a front stance on this track and all the better, for it adds another dimension to this schizophrenic creation and much like the track before you never know where it will end up. When they all lock in together it’s a treat for the ears, albeit one that you feel is beautiful yet at the same time could turn on you and cause you harm.

So I’ve tasted the blood and now I want more, it’s been a long time since I’ve heard a demo and wanted to hear a full length instantly so badly. So join the Colt and as Rev Jim Jones said drink up! Let’s just hope it’s not too long.