There has been a fair amount of buzz about the release of Oakland stoner/doom collective, High Tone Son Of A Bitch (HTSOB) and their debut release Live At The Hallowed Halls for a multitude of reasons. One of which is the circumstances in which the record came to be. Born, as many albums released the last couple of years, out of the global  covid-19 pandemic, and resulting shut down, the band, known as a who’s-who of Bay Area stoner and doom players, including Billy Anderson (Melvins/Porn (men of)/a ton of bands), Paul Kott (Kalas) and Russ Kent (Noothgrush) as the main figureheads, decided to record and film a live-in-studio record, spanning their career which reaches back the early ‘00s.

As well, the band featured many friends, and associates, including High On Fire/Sleep legend Matt Pike who sang on Kalas’s Self-Titled lone release, and Bryce Shelton of Acid King and Nik Turner’s Hawkwind, to name just a few. The musicians, apparently were pressed for time, as Hallowed Halls the studio, is in Oregon, and as the musicians were heading north from California, the governor of Oregon ordered a lockdown, giving the band very little time bang the record out, before the studio was shut down.

Under these crazy conditions, HTSOB and friends were able to execute these songs deftly. Silhouette kicks the record off with a heavy, lumbering blues rock riff, and plodding tempo, as vocalist Russ Kent belts out his introspective lyrics with emotion and conviction. Rob Wrong of Witch Mountain and The Skull shows up to do some killer dueling leads with guitarist Jake Navarra.

Wicked Threads features some nice synth work courtesy of Shelton, and some thoughtful lead work from Kott, as Kent mourns that ‘my best friends are all dead’, as this is most definitely a heavy-hitting, introspective track. The introspective blues rock vibe continues with John The Baptist, as Holy Grove’s Andrea Vidal shows up to duet with Kent. Her powerful, emotionally charged vocals carry the song, as she really lets it fly. As well, not surprisingly, there’s plenty of introspective shred from Kott. A standout track and performance for sure.

Live At The Hallowed Halls is an excellent album, it sounds fantastic, and it’s pretty cool to see this Bay Area collective come together and get this released…

HTSOB continue the heavy/introspective energy throughout Death Of A New Day that features a deep, contemplative middle section, featuring plenty of killer, single note lead work from Kott, and some soaring synth from Shelton. Tribute meanwhile opens with Anderson’s walking bass, as the legendary musician/producer leads the way. There’s a slightly heavier vibe throughout Tribute, but the band still stay within their established tempo for the most part. Kent really lets it loose here, as he’s hitting some epic notes with authority.

The centerpiece is of course HTSOB’s cover of Kalas’s Monuments Of Ruin featuring Matt Pike on vocals, as well as supplying some shred in the solo. The difference here, from the original, is Shelton’s synth, and the song sounds huge compared to the original, owing to the live recording, and the obvious time between releases. Pike sounds like Pike, and I mean that in the best way possible, as the band really lay into it, making Monuments Of Ruin an epic statement, and worth the price of admission.

Closer, Ten Mountain High, finds HTSOB moving along a bit faster led by Anderson’s dunga-dunga-dunga bass charge, and Kott’s killer guitar work. Ten Mountain High is most definitely the most charging rocker on Live At The Hallowed Halls, and thus works well as the closer.

Despite circumstances beyond HTSOB’s control, the collective of musicians really shine throughout Live At The Hallowed Halls . Perhaps the stress of recording under these circumstances brought the best out of them. All of the performances are outstanding, with Kent and Kott really standing out to my ears, to say nothing of the guests. Pike is great, but Vidal’s vocals on John The Baptist really steals the show for the guest performances. Live At The Hallowed Halls is an excellent album, it sounds fantastic, and it’s pretty cool to see this Bay Area collective come together and get this released, especially considering the circumstances. Recommended. 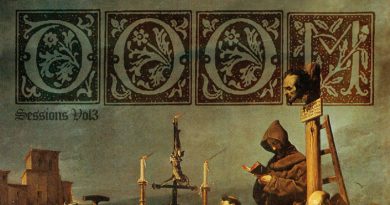