Long-time defenders of Savannah metal, Black Tusk, are fresh off the road of their tour with Kvelertak and Cancer Bats. Now gearing up for the release of their EP ‘Tend No Wounds’, Andrew fills The Shaman in on the trio’s love of hanging out in their back garden and how the band keeps the sludge sound fresh in an age where everyone is trying to escape the swamp. 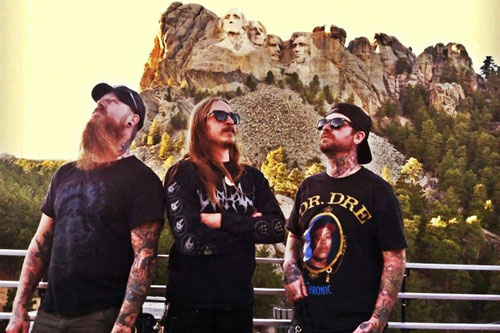 You’ve just wrapped up a tour with Cancer Bats and Kvelertak. How was that for you guys?

That tour was fantastic! It was very smooth and so much fun! Hanging with the Kvelertak and Cancer Bats dudes was great, all the bands meshed quickly and got along great. I got to get on stage with Kvelertak several nights and play guitar with them during their last song, ripping solos and crowd surfing! It couldn’t have gone out with a better bunch of dudes!

In the 8 years that you’ve existed as a band you’ve managed to put out three full lengths, alongside various splits, demos and EPs. That’s pretty impressive. What keeps the motivational fires burning and the creative juices flowing?

Well, we’ve always been in bands and playing music is what we do, you know? I don’t know what I would do if it weren’t for music. We’ve always got songs in our heads and we mesh well musically and have been playing together for so long, it’s pretty easy for us to write songs. We can predict what the other is going to do when we are writing and the songs just kind of flow out and mesh together. We are also the type of dudes who can’t stay idle for very long. We always have to be doing something forward moving, we are always thinking about the next thing. We also work with a bunch of great people that allow us to be so prolific with releases! Relapse is great about putting out stuff, my label Hyperrealist is constantly putting out stuff and the dudes with Brutal Panda and No Idea are great to work with too.

What prompted the decision to release ‘Tend No Wounds’ as an EP instead of a full length?

We were on a pretty heavy tour cycle and we hadn’t had time to write a full length, but we had a few songs, riffs really, that were demoed in the practice space and we wanted something new! So we had a few months’ break and went home and just wrote! We write together, there is no one song writer and we write all the songs for a particular recording in one session. The session can take weeks or months, but all the songs will come from that. We don’t really write individual songs and then piece them together for a release. They are all written together at the same time. And when we are done, we are done. The material for ‘Tend no Wounds’ ended up being long enough for an EP, so an EP is what we did.

Are you satisfied with how everything’s turned out? What do you think of the reviews you’ve seen so far? What do you anticipate fan reactions to be?

So far so good! We recorded a video on my iPhone of our studio experience and released that, we have a video for ‘Tend no Wounds’ that is about to come out and then the release on the 23rd of July! Everything is moving smoothly I think. We went with our old recording team of Philip Cope and the Jam Room Studio and got what I think is a great recording. We have all been working together for so long; it was a very smooth recording experience. They were ready for us when we got there, knew the sounds we wanted to get, and then we jammed it all out! 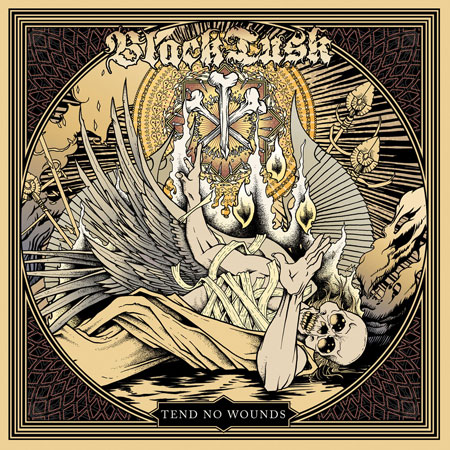 Do you currently have anything in the pipeline for another studio album?

We do not. There is talk of going to Converse’s ‘Rubber Tracks’ studio in Brooklyn, NY and doing something, but that is still in planning stages and we have yet to write the material for it. Right now we are focusing on the tour cycle for ‘Tend No Wounds.’

You guys prefer to be classified as ‘swamp metal’ opposed to ‘sludge’ – why is this? Define the term ‘swamp metal’.

We don’t necessarily prefer to be classified as anything per say. There have to be labels for bands so people know what to listen to right? Everything has to be tagged so it can fit somewhere. I like to think that we can be metal, or sludge, or punk, or rock, or whatever. We said ‘swamp metal’ because people want a label. We are from the swamps, we play metal, we play thick heavy music; thus, “swamp metal”.

Your lyrical themes revolve mainly around war and the apocalypse – what is it about these topics that interests you?

Maybe not so much war as the apocalypse and the actions of mankind; we are incredibly rude to each other as a species and bent on some sort of horrific end, so it’s something we like to vocalize. It’s all around you every day and it finds its way into our song writing. It goes pretty good with our music as well; the lyrical content matches the musical tones of our songs. Not every song is about that though. We have songs about having fun on the road, and music driving our lives in a positive way. Everything can’t be all bad all the time, so just like in life, there are bad things and good things, and we sing about that.

You guys command such a distinct sound, are you ever concerned that it will begin to stagnate or that you’ll run out of ideas to keep things fresh?

Not really. I feel like every album is different, but they are distinctly Black Tusk. We consciously think about that when we are writing. We don’t want each album to sound the same and get stale. We will be writing and playing something, and we will be like ‘this sounds like what we were doing on the last record,’ so we will change it or scrap it and start over. There are enough ways to be heavy and not repeat yourself, and we try to find those ways. 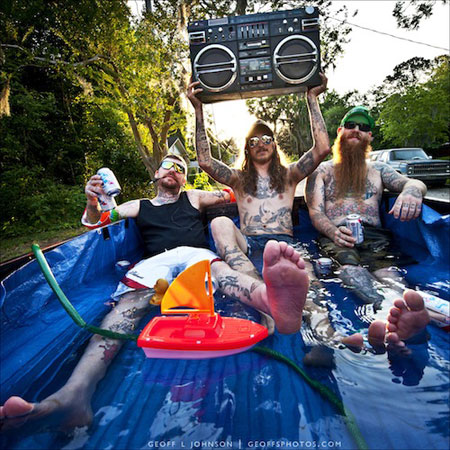 Do you ever feel like the niche you’ve carved out for yourselves restricts you creatively?

I mean every heavy band has a ceiling. We will never be AC/DC or anything, but I feel like we cross enough of the “metal/heavy” genre that we are always attracting new fans with each release.

In the two years between releasing ‘Set the Dial’ and ‘Tend No Wounds’, aside from the obvious of writing and recording, what else have you guys been doing?

Like personally? We spend about half the year on tour, so when we are home we work as much as we can. Athon and I do construction work and James is a bartender. When we aren’t working, we are usually grilling out and drinking beers with our friends. We aren’t much for the bar scene anymore unless it’s happy hour or we are seeing a show; we are getting older and work starts early, haha! And there are other things we would rather be doing than spend all day sleeping and hungover. Athon has started making custom drums, so he spends a lot of his free time doing that; his company is called 13star. We are making a guitar for me right now, and we make road cases, guitar cases, guitars, speaker cabinets and drums. Really we just enjoy our time home building things and hanging with our buds in the backyard!

Any bands you’ve yet to check off your split list? Who would you like to release an album with?

Who knows, we know so many awesome bands and tour mates, let’s see what the future brings!

What’s next on the agenda for Black Tusk?

We have a European and UK tour in September and October with our buds Fight Amp (who we have done a split with on Brutal Panda Records which will be available on this tour for the first time in Europe) so look for us then!

‘Tend No Wounds’ is out July 23rd on Relapse Records and you can also read Angela’s review HERE. 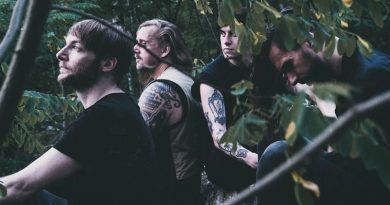