In naming their new album Dark Country Magic Big Blood have perhaps made any review of the record redundant as the title conveniently doubles as the most accurate description of their music possible. Their dispatches from their Maine base, having transmitted through the ether for 14 years, this record sums up what Colleen Kinsella and Caleb Mukerin have been up to very nicely indeed.

Based on, what I guess those of us on this side of the pond might perhaps generously and vaguely class as Americana, Dark Country Magic is a sunburned form of modern day roots music in reality, drawing on various spectres of their nation’s musical traditions and shooting them through with psychedelic tendencies. It’s honest music, the organic result of their own musical interests and surroundings, rather than some contrived attempt at homage or stylisation.

Take for example the way that on Is All We Have and Reverse Hymnal, a gospel element comes through, though it strikes you that the kind of choir you’d find singing these songs is perhaps more along the lines of a hippie cult than an ecumenical one. Ringer In The Fold and Song For Ro He Ge conjures up images of the Velvet Underground jamming in a barn, the former underscored with fiddle and lapsteel, the latter infested with spectral sound experiments gently in the background.

Its music that’s deeply personal without being overly earnest, and remains both inviting and bewitching in equal measures…

Kinsella’s voice is the star of the show here in reality. In the songs where she’s the sole vocalist for the most part, she approaches each with the requisite level of emotion and dynamic in her delivery. She belts it out from the heart on Creepin Crazy Time or She Wander(er), but her marriage of the wistful and the woe filled on Coming Home PTIII is a particular highlight. Both her and the record’s strangest point is Waiting Is, a moon dance of a thing where Kinsella comes across like a mischievous witch, out to both enchant and unnerve.

Big Blood‘s records have always seemed like snapshots from their own psycho geography at a particular time, and with the appearance of the duo’s daughter Quinnisa makeing an appearance to read us all a good night story of sorts. It’s an unexpected and fun note to end the record on.

As with the best of their discography, Dark Country Magic feels like this particular musical family have welcomed you in to their metaphorical (and probably literal) home for a short space of time. Its music that’s deeply personal without being overly earnest, and remains both inviting and bewitching in equal measures. 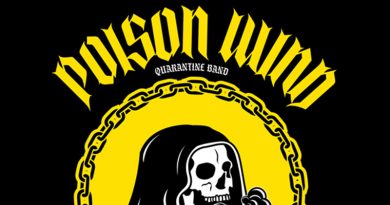