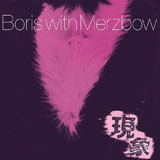 Gensho is a collaboration album, or rather it is two separate albums which the auditor is advised “are intended to be played at the same time at varying volumes so that the listener can experience their own “gensho/phenomenon” every time”. 50% of Gensho (one of two CDs, or two of four LPs) comes from heavy Tokyo trio Boris, while the other half comes from digi-noise mangler Masami Akita, better known as Merzbow. This is the sixth time Boris and Merzbow have released an album together, and this is the second double record designed to be played simultaneously that Boris have released (2005/6’s Dronevil being the first), so you can’t accuse them of not having thought this through.

My first encounter with Merzbow was the 1997 collaboration with noisegriders Gore Beyond Necropsy – Rectal Anarchy, which I bought because it looked like proper “crazy Japanese shit”, and indeed it was. The first time I heard Boris properly was on their glorious 2006 joint-effort with Sunn O))) – Altar. So, again, both collaborations. The former a succession of harsh and abstract screeching blasts of ultra noise, the latter a masterful taming of the none-more-heavy-and-slow aesthetic, adding nuance and even beauty.

Given the listening advice that comes along with Gensho, it would seem pointless to review either of the two parts alone. Being as I was listening to MP3 files anyway I combined the two albums using a bit of freeware, setting Merzbow‘s piercing wall of noise slightly lower in the mix – using that half of the record as the sonic landscape, and Boris‘ half as the architecture. Once I had those levels set the whole thing just seemed to click into place for me and, to my surprise, a weirdly mellow, pleasant sounding album emerged.

Every Boris track is drum-less reworking that has previously appeared on one of their other thirty-something releases with the exception of track 3. Resonance (which is sparse, space-echoing percussion), and track 5. Sometimes (which is a My Bloody Valentine cover).

Planet Of The Cows is the first Merzbow track, and this one lasts the length of the first two Boris tracks. We open with that familiar, grainy Commodore 64 loading sound from Merzbow but, as the first twinkling notes of Farewell begin to play, we get a bit of added resonant depth – a bit of room reverb – and the two tracks become one. The more I listen to Gensho, the more I notice these moments. These very deliberate changes in tone – sometimes actual notes – from Merzbow that show he has really, genuinely, created something that synchs up with, and adds to what Boris have brought to the record. By the time the first big chord is struck Merzbow‘s usually harsher-than-harsh screech has become a pleasant and powerful wall of white noise – sentient feedback with malicious intent. Noise comes to the fore again as Farewell fades away and takes on a more frenetic aspect, becoming downright demonic by the time the very big and very heavy Huge kicks in proper.

Goloka Pt. 1 plays for the length of the next three Boris tracks. The tinny snare being hit somewhere in the depths of a cave of Resonance is accompanied by Atari Punk knob twiddling; notes soaring and jittering. Then, as Resonance begins to fade away, some manic, bubbling, tiny paddle-drum percussion appears on the Merzbow palette, taking the place of the big drum intro for the laid-back Rainbow. As the gorgeous fuzz solo plays, it almost feels like Merzbow is playing along with it. Every last millimetre of sonic space is filled but, rather than being oppressive, it’s a kind of fuggy, dreamy pleasure. The noise builds to space-station radio chatter over Sometimes‘s sweet sulkiness – a busy montage backdrop behind the slow-mo opiated cover version.

Goloka Pt. 2 accompanies tracks 6 and 7 from Boris. Heavy Rain sounds absolutely beauteous – Merzbow‘s sound-scape a hissing tower of atmospheric background radiation. As we build towards the first big drones of Akuma No Uta the sounds become increasingly agitated as if in anticipation. This energetic bleeping and blooping continues throughout and, again, feels almost like a deliberate “solo” at times, with Boris providing the low-end accompaniment.

Prelude To A Broken Arm runs alongside the final two Boris tracks. The wet and wobbly percussive wah intro to Akirame Flower is joined by a white-noise hell-scream which continues throughout the MBV-esque song. Seemingly so completely at odds aesthetically, yet unapologetically relentless, by the end it kind of makes sense. Prelude To A Broken Arm changes as Vomitself begins – the digi-scream becoming an angry growl. This builds and builds and builds as Boris stagger on like a riff-breathing Kaijū until volume and noise consume and destroys everything.

Gensho is not a gimmick. The two parts genuinely complement each other, creating a cohesive whole. No wavelength is left unused – the entire sonic spectrum is filled – and while it can be overwhelming at times, it is a lot more engaging, pleasurable and genuinely listenable than I imagined it might be. Of course, my personal mix of roughly 60% Boris 40% Merzbow gave me something completely different to, say 70% Merzbow, 30% Boris, so in a sense I have only listed to one possible version out of many possible permutations of Gensho. Maybe I should give it another listen.

Crass ‘The Feeding Of The Five Thousand’ Reissue CD 2010