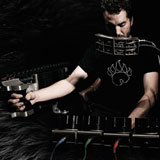 Throughout literature the concept of the existence of man and machine has always thrown out some fascinating concepts; from mechanoids taking over and turning on their former masters to the melding together of biomechanics. From Metropolis to Anakin Skywalker, the idea of a metal threat has become as ingrained into our psyche as the image of the T-1000’s glowing red eye.

Continuing this theme, Author & Punisher are back to give you Tristan Shone’s own unique take on the advancement of robotics with his one man musical symbiosis of metal and flesh. The machine assisted one man band has evolved from the days of playing guitar with a laptop full of effects to the integrated physical structure of the very instruments he now uses; devices that respond to the very movement of his body to create a sound that is truly unique.

Having reviewed 2010’s incredible’ Drone Machines’ album, I interviewed Shone on many topics surrounding Author & Punisher and he was in the process of developing new machines and making forays into the world of dubstep.

April 24th sees the release of Ursus Americanus (a quick Google search would suggest this appears to be the Latin for the American Black Bear), the next trip down the twisted rabbit hole of the mechanical grind overlord and what a trip it is.

If there is one thing that stood out from the last album (discounting its method of sound production) it was the ability to generate an atmosphere and ‘Terrorbird’ kicks off the album showing that gears may have been tweaked, circuit boards adjusted, but none of the magic has been lost as it swoops and clanks like a demented accordion. The immediate thing that strikes you is that there is a strong dub influence, but it’s not like any dub you would hear on the radio; this is a full on industrial doom howl cranked through filters that send you reeling with musical vertigo from everything going on, whilst the vocals rage around you in a distorted dread tone.

Second track ‘Lonely’ sees a collision of style, this time beeping and buzzing with the cold clash of pistons and metal whilst Shone intones the title again and again in a haunting, echoing refrain. This slides almost effortlessly into the ‘Mercy Dub’ interlude proving the flexibility of both the Drone and now Dub machines to bend sounds in ways that could not be replicated by conventional instruments before ‘Set Flames’ kick starts the soundtrack to the apocalypse with a whine of machinery that builds to a cacophony of sirens, pummelling the senses with its snarling lyrics. Just when you think you are going to explode the track drops out leaving you almost numb for a brief respite before finishing on a huge stomping doom ending.

The remaining three tracks showcase the fully diversity of Author & Punisher. Largely instrumental the tracks work through the urgent tempo and heavy dub influence of ‘Flesh Ants’ with it’s stuttering industrial walls of noise, to the mellow build and release dynamics of ‘Below & Above You’ before the seemingly understated ‘ILL Consuming’ draws closure over the proceedings with it’s rising screams.

What is plain from ‘Ursus Americanus’ is that like the ever changing arsenal of devices Shone is developing to challenge himself in the way he produces music, Author & Punisher as a concept and a band is also evolving; from the early Godflesh indebted Warcry, through the drone overload of the 2010 album to the progressive atmospheric tension of this latest release. It is clear that there are no limits or boundaries to what he could achieve… he just needs to build it and learn to play it first.