Relatively hot on the heels of their last album, GNOD come sleazing their way back with another Rocket Recordings release. Hexen Valley comes from a series of studio jams last summer up in lovely Todmorden, and purports to harness much of the singular weirdness of the place. Let’s set the navigation system for the Calder Valley and see what we find…

If Bad Apple was a short walk in the valley, Spotlight is a long night on the moor in bad psychic weather. Grumble grumble goes Haslam’s bass, beneath wailing guitars somewhere in the echoing headspace. The nodding groove/non-groove interplay suggests we’re here at the meat and bones of the matter, but to be honest, fourteen minutes of it is a bit of a slog. I’m undecided whether it’s a puckish challenge or a bit of studio-blindness to chuck this at the public so early in the album. Yeah, maybe you had to be there, or maybe there’s just only a few moments of cosmic alignment where this would work for me. I can certainly imagine the joy in its creation, and myself joyfully bothering the neighbours with it some lairy night.

Returning to more earthly garage punk realms, Skies Are Red shows that three minutes is plenty for a song to come unglued. Somehow the lively guitars become loveless machine parts to crush our bones, chainsaws for the forest trees.

Antidepressants pulls up with a screech into that queasy and cold space that GNOD have explored before (see The Whip And The Tongue and Town off their last, La Mort Du Sens). There’s a good thematic match with this distanced, dissociated sound (you’ll see what I mean), but this lot won’t stay quiescent despite that numbing cocktail. Proper gnarly and aggro, and drawling its way out with a surplus of attitude.

Hexen Valley casts a powerful spell, and exhibits all the dark restless power that we’ve come to expect from the wandering amorphous blob that is GNOD…

Maybe after all that, we need a proper fuzz blow-out. Oh aye, got one ready you say? Still Runnin’ draws out the psych leanings that were bubbling under the surface on Bad Apple in a swirl of buzzing and rattling gear. I mean, there’s even a guitar solo of sorts! Are GNOD allowed to be fun? Maybe at least one song per album.

Where to go to play us out? Well, it’s Waves Of Fear by Lou Reed of course. Some sort of practice-room fun times sing-a-long-a-nightmare. I must confess, I didn’t know the source material, and for me, the lumbering contraption of this cover works better than its 1982 forebear, which provides a backbone on which to hang all the eardrum-abuse and anguished howling that those present could muster.

So that was that, a document of some people in a place at a time. As ever GNOD are raucous and not really like anything else that comes to mind… but is there actually an album here? Somehow between the trial of Spotlight and closing with a cover, there’s a load of good stuff, but as a whole, it feels a bit thin. There’s not the rough intensity of Just Say No… or La Mort Du Sens, nor the unconstrained experimentalism heard on Chapel Perilous or the majestic Infinity Machines.

Maybe I’m measuring against the wrong standards though – as an invitation to join the musicians in this place and time, Hexen Valley casts a powerful spell, and exhibits all the dark restless power that we’ve come to expect from the wandering amorphous blob that is GNOD. 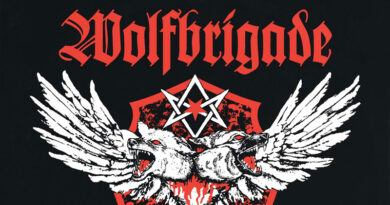