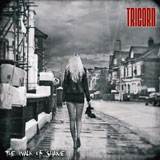 No one can honestly say that the underground stoner rock scene isn’t full of uncompromising, hard working and diligent bands. Tricorn emerged in 2010 with their self titled album that was a decent enough stab of noisy rock and roll with some fine songs albeit let down by a rather poor production. In the meantime the band have suffered the usual trials and tribulations that threaten to rip most bands apart such as members leaving but the band have stuck to their guns and powered through to produce a second album.

‘The Walk Of Shame’, named after the early morning stumble home of a young lady after a night of heavy revelry, is a spectacular improvement over their debut that shows how significantly the band have matured and improved, not to mention how the changes in line-up seem to have coalesced into something far more potent than before.

Opening with ‘Lady’ it’s clear from the very start that this is a reinvigorated band with a taste for the mighty riff and a knack for writing a pretty killer tune and throughout the album the quality never falters whether they’re rocking out with all guns blazing on the aforementioned ‘Lady’ or easing back on the throttle with the more expansive sounds of ‘Slipstream’. Gone also are the previous production issues. Recorded in Greece, original home of guitarist Constantine, the sound here is full, thick and commanding with a great vocal performance from Billy Dyne.

Tricorn persist in marketing themselves as a stoner rock band but in all honesty this does them a disservice. True they do owe some very heavy musical debts to bands such as Orange Goblin (vocalist Billy is a dead ringer for Ben Ward it has to be said) and some of their tunes do have that “stoner” vibe, whatever that means these days, but essentially this is just a very fine heavy rock band with an ass pocket full of big riffs and excellent songs who owe as much to bands such as Alice In Chains as they do Kyuss. Even then they don’t really seem to owe much to Kyuss at all!

For a band stuck in the arse end of nowhere on the South Coast of England, Tricorn are working hard to push this album, released on their own Bad Shrink imprint, and it deserves a lot more than a casual listen and should, if justice prevails, see them rise to the top of the mountain of UK bands all doing it D.I.Y style. Oh and don’t be put off by the cover that looks like a dodgy long lost Ratt album from 1987!!!