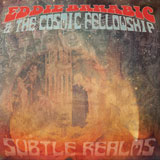 While deeply immersed in winter and with drone artists on constant rotation a tendency I have is to do a Michael Gira and dive deep into repetitive waves of sound. Today I found a cure for this behavior. Eddie Brnabic and his Cosmic Fellowship showed up in between the soundwaves and handed me their new instrumental album ‘Subtle Realms’. Playing a delicious mixture of psychedelic stoner and P-funk (yes, real Funkadelic, not the eighties fusion version of ‘funk’) with extra bits of Hendrix jams and Pink Floyd soundscapes chucked in, they quickly banished the suddenly overserious droners and made me shake my hips in trance. A plethora of tasty grooves, riffs, licks and quieter interludes passed and kept me dancing till the wee morning hours.

If the previous description of genres and musical influences did not entirely raise your attention apart from the Funkadelic bit, I don’t blame you. Nowadays there’s a thousand bands going for those ‘straight from the seventies’ angles – you’ve seen and heard ’em, they’re the retro bands that don’t rock too particularly hard but wear their flare pants especially well, the bands whose amps sound as if they stole ’em from a bad blues club and never bothered to twist the knobs – the bands that are very good at sounding like Hendrix but not playing like him.

And that’s where Eddie Brnabic & The Cosmic Fellowship actually succeeded. These guys sound juicy. Not only did they manage to make their retro sounds seem peculiarly not-retro, but through their playing they infuse the music with a vibrant energy that is seldom found in bands going for retro angles. It’s that quality of a band whose whole body is moving, not just the appendages they need for playing the music. That freeform jam thing, when everybody telepathically connects and even though they have no idea where they’re going they sure know that what they’re playing right now is The Shit.

Soundwise, Eddie and his Cosmic Compatriots utilise the usual tools found in the stoner shed: half-gritty seventies amps, fat sloshing drums (check out Moongroove’s obscenely loose snare wires!), lots of wah, delay, reverb and to top it all off a bunch of Pink Floyd synths, funky key bits and some bongos here and there. Shamanic cowl off to Eddie for preserving what’s good about all these sounds and making ‘Subtle Realms’ sound like it’s actually an album recorded in 2013. I mean, this shit sounds thick when it needs to. The guitar amps and pedals have been tuned well and, like the bass, sound like a warm bath. Oh, and hurray for no clicktracks! These guys know how to handle their dynamics, whipping them till they’ve had enough and can do nothing but lay down to lull the listener into a mellow vibe, only to start up a sexy groove twenty seconds later.

The melodies, riffs and grooves are not just catchy but for advanced listeners there’s an attention to phrasing that manages to surprise every time. Just when you think they are going to use this obvious note or that obvious transition, you’re surprised. If ‘Subtle Realms’ was a hamburger it would have lots of subtly surprising juices. Which is probably why they chose the title. Clever, clever.

Overall, ‘Subtle Realms’ is a fine achievement in the realm of laidback stoner, truly funky grooves and psychedelic jams. Fit equally for clubs, summer wine and spouses it will surely be the album I will consult when I need to impress a rocking lady. It’s juicy, what else do I need to say? Retro kids take note: this is how you play that groovy seventies shit. 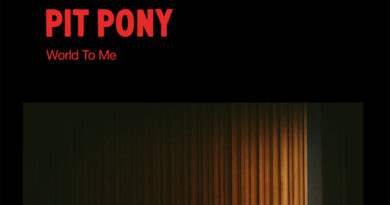 Review: Pit Pony ‘World To Me’