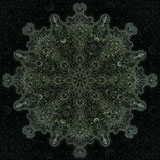 I know, I know. We’re certainly reaching critical mass when it comes to the legions of Bong-bands out there. We’ve already got the ‘Zilla, the ‘Ripper, Belze, the Skeleton and the margarita of all Bong-bands… errr, Bong. But don’t let all of this put you off as you approach Leeds’ BongCauldron, a frankly devastating melting pot of dynamite riffage and wizard-baiting avalanches of sludge, fresh out of Yorkshire. I’ve been following the progress of these Northern ruffians since their humble beginnings and whilst I’ll not hesitate to declare the new 2-track Acid Cattle EP as their strongest work to date, I’ll also not deny that there’s so much more soup left in their stew pot for subsequent onslaughts.

This beard-heavy power trio, comprised of Ben Bong (bass, vox), Biscuit Bong (guitar, vokills) and Jay Bong (drums) waste no time in setting out a punky tempo on track one, Swamp Law. As Biscuit and Ben blitzkrieg through, ummm, swamps of murky bile with their riffs held aloft like shining beacons above their heads, you can only sit back and allow yourself to be pummelled by Jay’s powerhouse blasting behind the kit.‎ There’s more than a whiff of the likes of High On Fire’s Fireface or Bongzilla’s H.P. Keefmaker on this 2.5 minute axe to the throat as the gruesome threesome roar us through a few bars of barely intelligible poetry from the beer-vomiting gutters of Headingley.

As speedy and freaky as Swamp Law is, the second titular track, Acid Cattle,‎ is just an absolute rager. “It smells of filth, it smells of disease and it smells of death!” cackles the opening sample in a typically Dopethronian fashion before BongCauldron slowly emerge from their cave, with seventeen thousand riffs in one hand and the severed head of a bear in the other. Somehow the gruff triad manage to make even the most ferocious of guitar lines sound bluesy and hooky as all hell as they chop and change between tempos with no fucks given and no energy spared whatsoever. God knows what the lyrics are on about, but there’s mention of people lying naked in the woods, witches’ blood, bitches’ blood and of course, the Acid Cow herself. What’s not to like?!

As well as rampaging metal which evokes everyone from ‎Dopefight to Electric Wizard in its punishment of your ears, there’s a more esoteric passage which opens up around halfway through the 11-minute marathon of destruction which hints at the cleaner pastures of Isis, Pelican or Elder. It’s a well thought out and a welcome departure that shows off the versatile side of this top-rate band alongside their ample ability to smash your face in.

I like BongCauldron. They’re humble, unassuming and confident lads who don’t fuck about and just give you the riffage you want in a greasy piece of chip paper and then head to the bar to get leathered with you. Their want isn’t to reinvent the riff, it’s to butcher us with it and I for one am going to strictly abide by their Swamp Laws from this point onwards.

Sun’s out, bongs out.