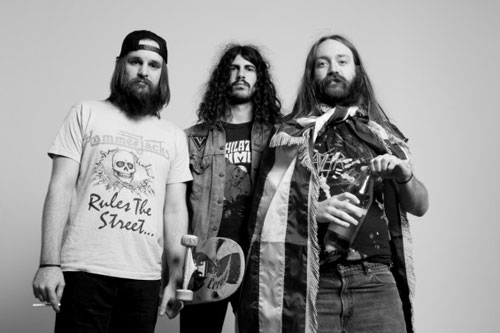 California hard rock kings THE SHRINE will release their new LP Bless Off on March 11 via Tee Pee Records. Recorded at Eliminator Studios in Venice Beach, CA, Bless Off is the follow-up to the power trio’s debut album Primitive Blast which was hailed as one of the “Top Los Angeles Metal Albums of 2012” by LA Weekly and one of Decibel magazine’s 2012 “Albums of the Year“. In celebration of the upcoming release, VICE‘s Noisey premieres THE SHRINE‘s new song ‘Nothing Forever’, saying, ”The song mixes elements of Black Sabbath-y riffs before settling into a punk rock groove, and feels just like the soundtrack to dropping into an empty pool. Also, ‘Nothing Forever’, just like The Shrine as a whole, totally rips.” Don’t delay, make your day by blasting THE SHRINE‘s ‘Nothing Forever‘ now at THIS LOCATION!

Recorded on reel-to-reel tape using vintage gear and colossal Marshall stacks, Bless Off is a record that attacks with buzzing riffs, blazing hooks and a bruising, mega-amplified punch. The album features 11 tracks of quintessential riff rock channeling hazy hesher glories including a song ‘The Duke‘ with lyrics penned by Chuck Dukowski in 1983 originally intended for an unreleased Black Flag song. The cover art to Bless Off features THE SHRINE‘s ever-present wolf mascot and is an homage to legendary skate punk and gig flyer artist Ric Clayton (Suicidal Tendencies) and Dogtown Skateboards. Bless Off is available for pre-order purchase at THIS LOCATION.

Undoubtedly one of America’s hottest underground bands, THE SHRINE plays loud, heavy rock ‘n’ roll fueled by cheap beer and bad acid that combines the hook-laden appeal of ’70′s garage rock and gritty ’80′s hardcore with a skate punk energy and attitude resulting in a sound the trio describes as “psychedelic violence”.

A STORM OF LIGHT: New Track Premiere Hosted By Pitchfork