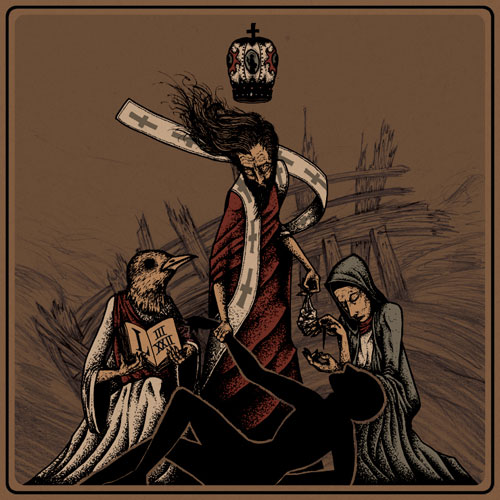 The ground will shake as Future Noise bring two rising titans of the UK underground together for what will be one of the heaviest releases of the year. Blackburn’s noisiest sludge merchants BASTARD OF THE SKIES and Birmingham’s purveyors of filthy doom GRIMPEN MIRE go head to head on a limited split 12” featuring new, previously unheard tracks from both bands.

BASTARD OF THE SKIES take over side A, with four songs that further reinforce the potency of their hard-hitting, sludgy noise rock that so captivated anyone subjected to their most recent full-length, 2012’s ‘Tarnation’. Cavernous, bass-heavy monsters like ‘Yarn’ or closing behemoth ‘Old Vessels’ will make side A’s 20 minutes feel like 20 years of ugliness, corruption and anger as the unstoppable mega-riffs pile around the poor listener.

Side B is left entirely to GRIMPEN MIRE’s sonic pollution, and their 20 minutes are spent with but three songs, each driving the listener down into a deeper, darker pit of death and despair. Sounding even more despondent than they did on their cult debut full-length, 2012’s ‘A Plague Upon Your Houses’ which still seems to plague us today, GRIMPEN MIRE deliver proper horrid doom as a perfect complement to BASTARD OF THE SKIES’ opening confrontational aggression.

All seven songs were recorded by BASTARD OF THE SKIES guitarist/vocalist Matt Richardson at his own Full Stack Studio, and to further reinforce the massive weight of both bands, master of sonic grimness James Plotkin (OLD, Khanate, Khlyst) was roped in for a typically amazing mastering job. The limited 12” is still adorned by Michael Cowell’s deeply evocative artwork, perfectly capturing the feeling of creeping dread evoked by both bands.

This heavy slab of wax is set to be released via Future Noise on the 10th May 2014 and pre-orders are available now from the labels webstore HERE.

MACABRE: US Mini-Tour For 20th Anniversary Of ‘Sinister Slaughter’ Begins Next Week