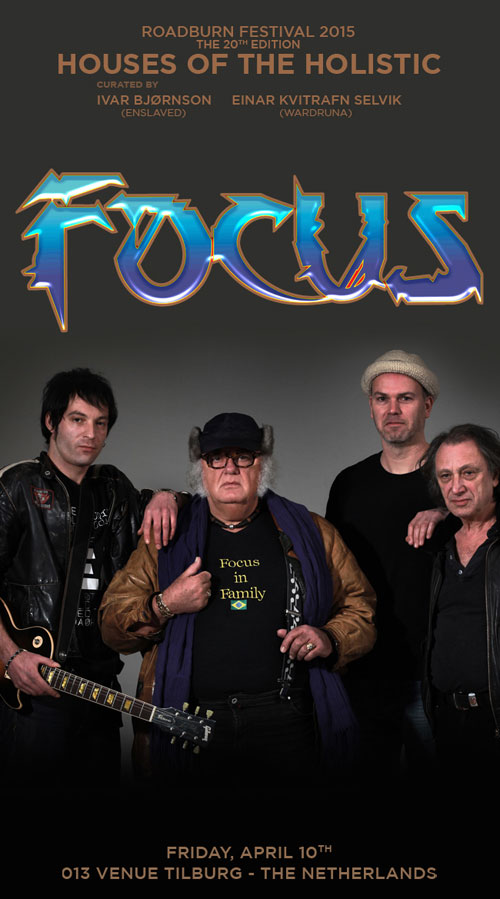 Walter & co are elated, nearly speechless to announce that Dutch prog rock legends Focus have been confirmed for Houses of the Holistic, Ivar Bjørnson‘s and Einar “Kvitrafn” Selvik‘s curated Roadburn event on Friday, April 10 at the 013 venue in Tilburg, The Netherlands.

With their unique brand of progressive rock, Focus established themselves at the start of the 70s as the most successful and appreciated of all the Dutch pop-rock exports. Fronted by founding member Thijs Van Leer, and best known for their hits “Hocus Pocus”, “House of The King” and “Sylvia”, as well as critically acclaimed albums Moving Waves, Focus 3 and Hamburger Concerto, Focus regrouped with a fantastic new line up in the early 2000’s, which resulted in several well received albums, like Focus 9 / New Skin and Focus X.

Focus today consists of Thijs van Leer on vocals, flute and keyboards, and famed Focus drummer Pierre van der Linden, who joined the group on their second album Moving Waves in 1972. Internationally renowned for his rhythmic skills, Pierre remains a defining factor in the Focus sound. Bassist Bobby Jacobs, who comes from an acclaimed Dutch musical family and guitarist Menno Gootjes, who participated in Focus at an earlier stage, complete the band’s current line-up.

“If you know anything about prog beyond “old Genesis, not the new stuff”, you know Focus – an extremely influential band for any band in the progressive tradition that came after them; whether its progressive Metal like we try to fool around with, or purer retro-prog (a funny combination of concepts, by the way)”, says Enslaved’s Ivar Bjørnson. “Focus embodies everything that is true “Prog” for me: the incorporation of the classical elements, the tongue-in-cheek playfulness across times, genres and geography – and of course extraordinary musicianship. These highly vital legends has also shown amazing form live these days, so having freakin’ FOCUS accepting our invitation for our curated day. To put it simple, straight-forward and un-proggy: a dream come through!!!”