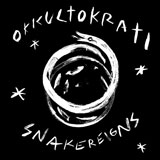 The melding of hardcore-punk and black metal is becoming all too common as of late but no band makes it sound as unholy as Okkultokrati. Hailing from Oslo, Norway it would be fair to say they had a good knowledge of all things black before their conception and their use of old school punk completes a sound which is amongst the most vile yet enjoyable of 2012.

‘Snakereigns’ is Okkultokrati’s second full length and continues down the route of hellish ferocity that has given them such a praised name in the underground. As with debut ‘No Light for Mass’, this opus contains a varied concoction of styles that has made their fan-base compromise of everyone from modern sludge dropouts to black metal elitists.

The album gets started with a Burzum worthy, icy melody on ‘No Ouroboros.’ This song is a good starting point to people unfamiliar with Okkultokrati’s sound, creating a suffocating, anarchistic take on modern extreme metal that is also typically Scandinavian.

The following number and title track of the album is much heavier on the punk with a short, sharp stab coming in at under two minutes. This song also demonstrates how tightly the band work as a unit while still managing to maintain those DIY punk aesthetics.

One element of the band that instantly grabs you by the claw is the unholy vocals of Black Qvisling. His raging, raucous pipes certainly give the LP a sense of energy and the man sounds genuinely possessed on tracks like ‘I Thought of Demons.’

The lack of expansion on Black’s vocals is also a welcome element on ‘Snakereigns’ with, frankly, little experimentation needed. A raw, unhinged performance is consistent throughout the album which works perfectly if listened to straight after ‘No Light for Mass.’

However, this doesn’t mean that the rest of the band have shied from some occasional experimentation with several different sounds making their mark on the opus. The fantastically titled ‘Let the Sun Receive Her King’ goes in to ‘stoner’ rock territory and has a much less heavy (but none-the-less rocking) vibe than old Okkultokrati fans will be used to.

Elsewhere, album highlight ‘We So Heavy’ delves in to the band’s penchant for sludgey psychadelia with a repetitive riff that’s helplessly hypnotic. This song is also a sly nod to their dark sense of humour that is lost on the ‘more kvlt than thou’ bands.

The album closes with their most chaotic track in the form of the optimistically titled ‘Nothing Awaits.’ This song is the answer to those who wish bands still produced gritty, meaningful punk that can instantly strike a note and create an atmosphere.

Okkultokrati have created a marvellous piece of misanthropy with ‘Snakereigns.’ The album is sonic excess in its bleakest form and has the power to make a serious mark on subterranean metal.