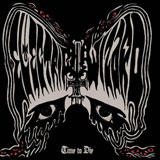 I don’t give a shit if every single reviewer talks you to the mouth, press agent. They are all retyping your synesthetic descriptions of hammer horror. Adjective-laden pieces of poor taste, written by yes men, hyping your shit up, playing your fucking cheerleaders. But they never wrote a bloody song. Shit, if I read hammer horror, occult and drugs one more time (or the beardneck Vice ‘n’ Pitchfork version, ‘seventies sleaze’.. pfff) I’m gonna go to my grandma and see how hard she’d laugh at all this. None of these reviewers get to the core of the Wizard’s magic; all they can do is retype a press agent’s childish seventies musings and maybe point to why Dopethrone was heavy, but they’ll never know.. they didn’t jam.. they didn’t get into a rehearsal space; they don’t know what it’s like to play music furiously and with abandon, simple as that. They only know when, miraculously to them, this way of playing creeps up on records. Because the fans told them. That’s you, dear reader. It’s you… and you don’t want a vibe description, you want a fucking VIBE.

So let’s get down to it. But wait? Wasn’t there controversy around? Yeah. Supposedly, Simon Poole is a very happy man. But it doesn’t sound very ‘seventies sleaze’ at all, does it? No it doesn’t, so let’s not waste any time on it. Good luck scrounging the internet for tidbits, children. Have a look at the pages. I will tell you one thing though. This reviewer has no opinion on this but The Following: it is a goddamn shame that us humans always end up destroying each other or the environment and it is as much of a shame that everybody’s modern Sabbath is now as Sabbath as Sabbath itself. It is nothing but sadness, and since we’re all gonna die, this Shaman believes there is no alternative but making the best of it since all the alternatives suck, as the Wizard is aptly demonstrating right now. There. That’s my official position. On to the review.

Let’s get the first point out of the way. Another reviewer noted that ‘round Witchcult Today and Black Masses, riffs started to sound a little samey. Samey? It took you till this album to notice that Witchcult Today and …A Chosen Few have the same riffs? You probably never knew there was another song titled …A Chosen Few on Let Us Prey either, did you? Nor that Legalise Drugs & Murder was a big Witchcult Today rehash, full of riffs out of … A Chosen Few and other songs I haven’t got the patience to hunt down? You didn’t notice that Incense For The Damned’s intro is Weird Tales all over again, or that Sadiowitch is a mélange of every fuckin’ riff in Black Mass, just rearranged, with verse and chorus inverted? That the entire Time To Die is full of guitar phrasings that by now can be called ‘Obornisms’? Have you been sleeping? Why are you so kind, reviewers? Have you no anger left? Jus once accurately noted he’s got a specific downstroke pattern and that Liz fit well because they have the same kind of guitar strokes – and I hope they’ll listen to some of the modern French black metal or something ‘cause they seriously need some new satanic chords.

Do we care? Yes we do. The screaming dead do not abide uninspired overlords. Do we mind? No. Mark Greening’s feel on the drums is unsurpassed; the riffage, Jus’ bass and Jus’ desperate acid-wails sound as entrancing as ever. Is it a bit heavier than the last two soft rocker albums? Yes it is. The band plays with abandon. They jam. They get into musically hairy spots, where they bash themselves through real freeform hell. Now let’s hope it wasn’t just Mark Greening’s fabulous backbeat that inspired them to do so because these are awesome moments. Another reviewer once said the Electric Wizard’s guitar at its best moments is like a hatchet, mowing through the front row, while the rhythm section is having a party in the back. Well, that sound is back. This time steeped in post-Buckingham ‘seventies vibes’, but it’s there, nonetheless. This is a huge achievement for any band and as a fan I’m happy they’re back into destructive freeform jams.

So what do you want to know? Song by song? Yeah – Incense For The Damned has some great and addictive Wizard riffs.. Funeral Of Your Mind has a great dark Hawkwind feel which is awesome and We Love The Dead has a great depressed horror feel about it (like Murder & Madness) but it’s I Am Nothing and Lucifer’s Slaves where the ‘DOOOOOOM’ sections start getting real transcendental. Like when you finished Return Trip for the first time because you couldn’t really lift the joint, much less the needle. Yup, like I said, they’re doing it again.

You know what the thing is? When Electric Wizard rehash a riff or bring out a song that sounds a bit less heavy than the other ones, they’re still ten times harder, tougher, jammier, more evil, well, BETTER, than 99% of ‘stoner doom’. No wonder everybody is following them, not the other way around. Luckily they also pick up the anger gauntlet this time, so as to prove why they’re still around – and boy, do we love it when the Wizard start playing with abandon. It’s that MC5 energy. Such a shame, then, the lurid behavior towards everybody else… as I said, Simon Poole must be a very, very happy man. But you, dear reader? You… you know more about energy in musical playing than any reviewer could ever hope to put into words. Make up your mind, but I myself, I’ve bought it. Music is music. Time To Die crushes like it should.