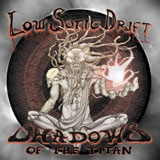 Glasgow’s Low Sonic Drift, like the drug with which they share their initials seek to confound, confuse and generally fuck with your perceptions. A mash up of stoner, thrash, psychedelia and prog, on paper this sounds like a nightmarish and disjointed journey into a kitchen sink approach to metal but in reality this is a remarkable release from a remarkable band.

LSD don’t play by the rules. This may only be a 5 track EP but they treat it from the off like a full album. Instead of going straight for the kill as most bands would naturally be tempted to do, opening track “The Sun Doesn’t Rise” comes creeping in on a snaking bass line while sparse piano chords reverberate and a lone violin weaves and Eastern melody before the riff fest begins. This track is definitely the ace in the hole on this release as a Bay Area tinged riff motors behind vocalist Ramo’s Eastern influenced melodies. When the chorus hits it drives straight into your head…you won’t be forgetting this in a hurry. Ramo’s voice is clear and melodic yet edgy, not unlike James Hatfield at times and his way with a melody is both inventive yet catchier than swine flu at an orgy!!!

Of the remaining tracks, “Hyperion”, “As the Crow Flies” and “Shadows” maintain the high level of musicianship and song writing promise that the opening track displays albeit not quite in the same league. Throughout the band touch bases with Alice in Chains, Voivod and Kyuss whilst throwing a little Tool into the pot just to fuck with you when you thought it was safe to assume where they’d go next. And just when you did think it was ok to stick you head above the musical parapet they fire another loose canon with the track “Tamrine Namayesh”. Where most bands faced with the limitations of a five track EP would seek to display their most killer material and go for the throat, LSD drop a completely different kind of bomb and throw in a chilled out melodic piece that again draws on an Eastern influence and what sounds like traditional Eastern instrumentation. It’s a brave move but far from ruining the flow of this release it actually serves to give it a more complete and considered feel by showcasing the breadth of their talent.

LSD are unfashionable and that in itself should see them hailed from the rooftops in terms of the highest exaltation as the great hope for Scottish rock. Buy this release then bombard them with requests for an album…the people are waiting!!!!