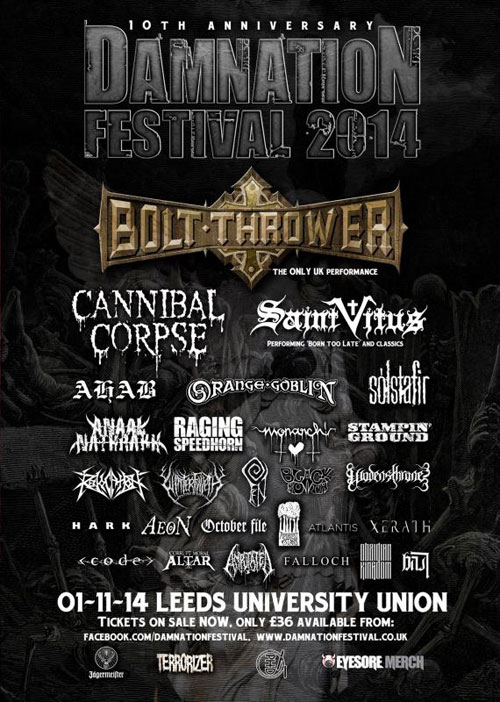 French drone doom outfit MONARCH! will play their only UK show of 2014 at Damnation Festival.

While the Eyesore Merch Stage makes its return to Damnation, this year with a more sinister black metal billing of Fen, Wodensthrone, A Forest Of Stars, <code>, and Falloch, who’ll join previously announced Bast and Obsidian Kingdom in Mine.

The final additions to this year’s event – which will be hosted at Leeds Universtity Union on Saturday, November 1 – are orchestral metal quartet Xerath and Welsh death metal standard bearers, Amputated, who make their debut at Damnation Festival opening the Terrorizer Stage which boasts the brutality of Cannibal Corpse, Anaal Nathrakh, Revocation, Winterfylleth and Aeon.

Commenting on their return to Damnation, Fen said: “We are honoured to be invited to play Damnation after our first appearance four years ago. It was one of the highlight gigs of our career – this festival (and the audience in particular) – is a very special one for us and we cannot wait to head back to take to the stage again. Fen has progressed significantly over the last four years and we are really looking forward to taking the discerning Damnation crowd by storm once more!“.

A Forest of Stars added: “We’re extremely excited and honoured to be asked to play the wonderful Damnation Festival. We hope we won’t let everyone down too much – especially considering the impressively amazing line up – and look forward to devouring vast quantities of claret and opiates in celebration of the occasion, and maybe even playing a song or two“.

Festival Director Gavin McInally said: “This year’s line-up is fitting of a tenth anniversary party and with tickets on track to have 4,000 friends with us, it’s going to be a bash to remember“.

Fans who arrive in Leeds the night before can warm-up for Damnation Festival with A Night of Salvation at The Belgrave Music Hall, featuring Dyscarnate, Hang The Bastard, Latitudes, The Atrocity Exhibit and Cattle. Tickets priced £6 are available on the door.