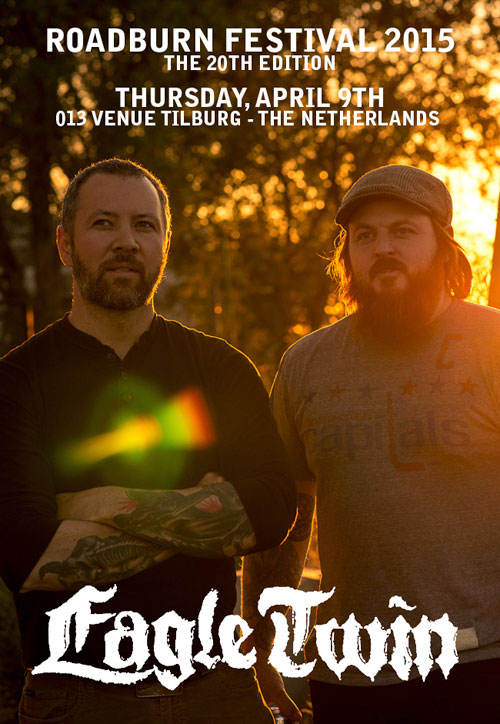 Salt Lake City-based heavy rock duo Eagle Twin will return to the 20th edition of Roadburn on Thursday, April 9th at the 013 venue in Tilburg, The Netherlands, to devastate the vast legions of forward-thinking riff seekers with their incredibly dense progressive-sludge noise.

Eagle Twin merges the talents of guitarist Gentry Densley (of legendary post-hardcore / jazz icons, Iceburn) with the thunderous percussion of Tyler Smith, and their latest opus, The Feather Tipped The Serpent’s Scale, picks up right where the band’s acclaimed debut LP, The Unkindness of Crows, left off. The Feather Tipped The Serpent’s Scale even boasts some of the most mesmerizing and monstrous riff transformations from Eagle Twin to date, and tops it’s predecessor in terms of all-encompassing tone and atmosphere.

Lyrically, the crows documented in the first album have battled the sun and were burned back down to earth as black snakes, which become the thematic center of the new album exploring the various mythic and symbolic incarnations of snakes. Ultimately, the great ancestral snake is transformed from its lowly beginnings back into a bird soaring upon the thermals. Demonstrating the cyclical nature of being.

Tap into in Eagle Twin‘s epic story-telling, and bask in their heavy rituals at Roadburn Festival 2015.