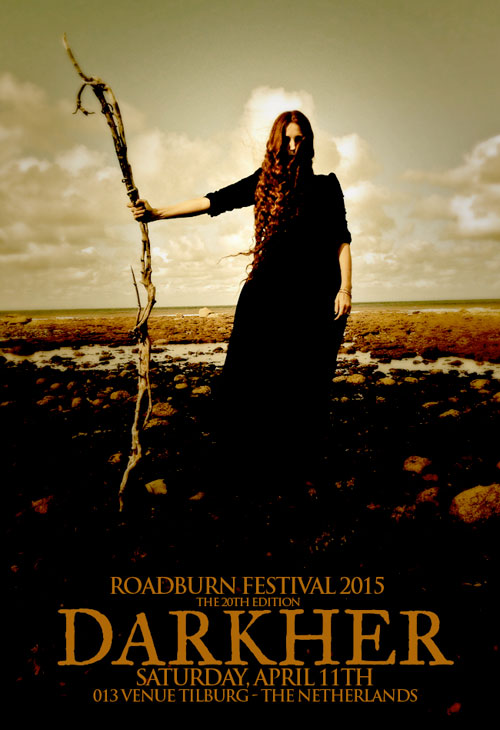 Jayn H Wissenberg is the woman behind the utterly mesmerizing Darkher, a gothic, shamanic presence whose spine chilling, powerfully emotive music (reminiscent of Mazzy Star channelling pure darkness) blew Walter & co away based solely on three self-released tracks. They were so moved that they had to invite this West Yorkshire-based singer-songwriter to play the 20th edition of Roadburn Festival on Saturday, April 11 at the 013 venue in Tilburg, The Netherlands.

They don’t book artists only based on a handful of tracks very often, but without exaggeration, Darkher had an indelible impact on them, and is a huge rising talent in the field of dark and atmospheric guitar-based music along the lines of Chelsea Wolfe, who played Roadburn 2012.

Releasing The Kingdom Field EP through Prophecy Productions, Darkher ‘s captivating music is characterized by slowly building storm clouds of guitars and even more Jayn’s haunting, evocative voice. It is unprecedented dark music full of contrasts, at once powerful and fragile, wracked and serene, sporting an atmosphere of esoteric splendor and a deep spiritual confidence.

Let Darkher transport you to an ancient, mystical, otherworldly place at Roadburn 2015. They know that she will cast her powerful spell over you too, just like she did to them.

Roadburn are also premiering the video for the track Ghost Tears, check it out here.