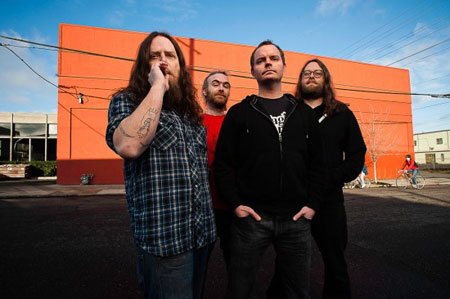 RED FANG just wrapped up their North America tour with Mastodon and The Dillinger Escape Plan and are now in the midst of their own run of headlining dates. In conjunction with the new tour kick off RED FANG has teamed up with RCRD LBL for a FREE mp3 download of their song “Number Thirteen“. The track can be downloaded HERE.

“Number Thirteen” is also featured in the new video game Rocksmith. A trailer for the game can be viewed HERE. Rocksmith is a music video game available on Playstation 3 and Xbox 360 that allows players to plug in virtually any electric guitar and play.

The band recently finished work on a new video for the song “Hank Is Dead” with director extraordinaire, Whitey McConnaughy. Look for the video to premiere in the coming weeks. Stills from the video shoot can be seen HERE.