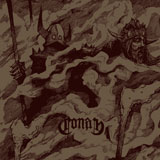 “Fire and wind come from the sky, from the gods of the sky. But Crom is your god, Crom and he lives in the earth. Once, giants lived in the Earth, Conan. And in the darkness of chaos, they fooled Crom, and they took from him the enigma of steel. Crom was angered. And the Earth shook. Fire and wind struck down these giants, and they threw their bodies into the waters, but in their rage, the gods forgot the secret of steel and left it on the battlefield. We who found it are just men. Not gods. Not giants. Just men. The secret of steel has always carried with it a mystery. You must learn its riddle, Conan. You must learn its discipline. For no one – no one in this world can you trust. Not men, not women, not beasts.”

And learn its secrets and discipline Conan sure have! Once more they ride out into battle with one of the heaviest sounds known to men, their riffs forged in the kilns of Doom itself. Onwards they stride, to the beat of the drums of war. Six mighty hammers to crush their enemies, see them driven before them, and to hear the lamentation of their women are wielded here.

The title ‘Blood Eagle’ is befitting this vicious onslaught of an album! The term blood eagle comes from a horrific method of execution used by the Vikings. It was performed by cutting the ribs of the victim by the spine, breaking the ribs so they resembled blood-stained wings, and pulling the lungs out through the wounds in the victim’s back. Salt was sprinkled in the wounds. I must say that the force of the down tuned rumble is enough to break your ribs for sure.

The opening track ‘Crown Of Talons‘ is a slow, menacing track. It has a feeling I imagine one would get while riding to the battlefield. Unsure of what awaits, not knowing how many will oppose you. The only certainty being that Death will be present all around. The ground trembling with the sound of a thousand armoured horses, drums and flutes droning in the distance. There is fear in the air, yet onwards you ride.

Onwards to ‘Total Conquest‘, which starts off slow but has these killer tempo changes that made Celtic Frost and Thee Plague Of Gentlemen so great. I still wonder how they managed to get their sound so low, yet still audible. Toward the end the speed goes up, the horses break into a gallop, to charge into battle!

We raise the ‘Foehammer‘ and wildly bludgeon those that are foolish enough to stand in our way. Here the tempo lies a bit higher, as it should be when fighting, Skulls of strange creatures are cracking beneath our feet and orcs and trolls are falling by the hundreds.

The next track ‘Gravity Chasm‘ has a great tempo for banging your head until your neck snaps in half. To me this track would be the glorious celebration of victory combined with the pillaging and burning that goes with it.

‘Horns For Teeth‘ is the next track and here the spirit of Thomas Gabriel Warrior flows strongly. A track so heavy and endowed with such monstrously large testicles it would scare even the fiercest warriors.

Closing of the album we kneel before the ‘Altar Of Grief‘. It might have been called Altar of Doom. It’s that heavy…it hurts! This is the track that represents the rites of burial in the night, the songs of grief raised to the fallen warriors, brothers mourning the loss of their kin.

“The mounds have been here since the time of the Titans. Kings buried in them… great kings… domains once glittered like the light on a windy sea. Fire won’t burn there… no fire at all. That’s why I live down here in the wind. I sing to them. On nights, when they wish, I sing of the tales of battles, heroes, witches and women. Nobody bothers me down here.”

Will the band cry for the fallen? Will they morn the losses caused by this battle?

In the words of a great warrior: “He is Conan, Cimmerian, he won’t cry, so I cry for him.”