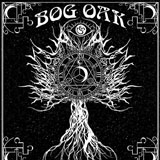 A Treatise On Resurrection And The Afterlife. It’s a grand name for an EP. I can tell you off the bat that if you’ve come to this expecting any explication or criticism of the record’s ontological reckoning then stop now. There are no lyrics available at the time of writing and deciphering the vocals is a task beyond me.

Having said that, the album’s artwork and song titles are a clue into what approach Bog Oak might be taking. A mixture of occult and esoteric imagery placed alongside title such as The Science Of The Afterlife and A Treatise On Animals lend a medieval alchemical feel to this debut album from the Californian doomers, though without the convincingly strong aesthetic that bands such as Blood Ceremony, Jex Thoth or indeed Electric Wizard have cultivated for themselves.

Bog Oak‘s sound is fairly predictable given the aesthetic. Built on a foundation of neo-Sabbath doom metal and mid-90s gothic metal, elements of black metal ebb and flow throughout the songs with varying success. The head-nodding groove of opening track The Science Of The Afterlife develops through a wide range of chugging sections, furious sections, heavy pounding drums, and an unexpected mix of clean and growly vocals. Stephen’s drums are the real shine here which, although not complex or unique, do exactly what drums should be doing on a track like this: holding everything together like a network of ropes. The riffs are fairly bland bar the mid-song lead break so it is the drums that really push the song along.

Final track A Sea Without Shore reinforces the primacy of the drums, where once again it is the beat that carries the song. The guitars are pleasantly formless this time around, fuzz rolling around like fog from which Julie’s vocals pour forth. This track is, in my opinion, the strongest on the EP thanks to its focus on creating atmosphere rather than shoving hobbled riffs in your face. Its marching pace befits the threatening occult aesthetic. It doesn’t fall prey to utilising fast parts that ultimately feel flat, as found in second track The Resurrection Of Animals.

When song two begins, black metal noticeably creeps in. The Resurrection Of Animals contains  the sort of retro-thrashy black metal that was popular ten years ago, borrowing heavily from the sound of Hellhammer and early Samael. Though remaining admirably heavy, the shift marks a departure into forgettable riffing being neither good doom nor good black metal. This second song remains strong on the vocal front, however, the mix of vocal approaches working effectively to capture the changing dynamics between anger and gentleness.

Between all of this is the straight fury of Time Drift Of Seasons, where the black metal elements come to the fore. Sounding like a Hellhammer worship song at times, but without the nostalgia associated with early 80s black/thrash acts, the most interesting section of this short song is the middle bridge that returns to fast thrashy riffing: a classic dynamic shift that works to good effect here.

Across all four tracks there is one particularly redeeming feature and that is guitar tone – ironically enough considering how unfavourable I have been to the guitars. A combination of good choice by the guitarist and good studio production means that, despite the riffs being largely uninteresting, the actual guitar tone itself feels thick and fuzzy just as one would want from a band like this. This is backed up by production across the other instruments: the drums heavy and punchy enough, the bass pervading enough, the vocals thick and monumental enough to suggest something imposing. The leap to creating an actually imposing atmosphere isn’t totally achieved, however, if the band pursues a direction similar to the last track, then maybe Bog Oak will claim the grandeur and darkness of their titles and artwork.