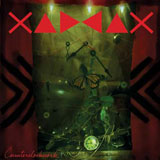 Bonding over a shared love of “palindromes and pointy letters”, and, uh, each other, No-Wave sci-fi skronk duo Xaddax are quite the pair of sick, headache-inducing li’l puppies. Sure, they may be based in Brooklyn, New York, but these fucking weirdoes are clearly from Venus. Just listen to their deeply alien bunny-hop, driven by Chrissy Rossetie’s cracking toms – no cymbals – hissing, whirring, bleeping, buzzing sci-fi sound FX and Nick Sakes cascading angular guitar abuse and deeply vexed howl, then tell me it was made by human beings.

No way José , I don’t buy it. Bug-eyed beings from Venus made Counterclockwork, this much is clear to me. Just LISTEN to it!

Would a normal human being have composed something that lurches, frugs, twists and bloops like ‘Dropping Knives Down The Well’? Uh-uh.

Even Sakes’ past endeavours with such math-noise-rock luminaries as Dazzling Killmen, Colossamite and Sicbay couldn’t prepare you for the awkward tumble of seemingly-unconnected guitar spooge he sprays all over this record.

Taken alone, Sakes’ trebly fuzz-driven attack could probably induce fits in Mick Barr, but when welded to Rossetie’s off-kilter-yet-absolutely-bang-on-the-money tom patterns and UFO sounds, the whole shebang is just deadly, and rather being an irritant, worms its way beneath the skin until you find yourself twitching along in unison like John Hurt laying on a table waiting for something to come a-hatching from within.

Sakes yelps, shrieks, whispers and hollers his way through Counterclockwork with such a sense of bristling urgency he pushes the sense of fraught, frayed nerves already inherent in the music right over the edge. From opening salvo ‘Lives On Nerves’, its propulsive follow-up ‘Sick Sneak’, the hissing discord of ‘Busted Circuits’ and the tumbling fury of ‘Falls Off The Bone’, via the tightly-wound ‘The High Hat’, with its cascading, fizzing electronics, the Swans-do-Devo oddness of ‘Hit Cancel’ and to the tensely circling riff and tightly-reined-yet-chaotic meltdown of closer ‘Stark Terms’, Xaddax never let up or ease off on the weird shit.

This pair of goddamn martians or whatever the hell they are, have beamed in an unsettling, compelling and downright strange record that defies any kind of logical explanation. Fans of early Devo and Brainiac may find much to dig into here, along with those one-or-two weirdoes who ‘like’ Quintron And Miss Pussycat and their weird Skin Graft brethren, but really Xaddax transcend such lo-fi oddballs. They do this better….whatever the hell this is.

It’s probably easier to blame Counterclockwork on swamp gas from a weather balloon, trapped in a thermal pocket and refracting the light from Venus than on conventional human beings with guitars, drums and synths. That’s my explanation and I’m sticking to it.