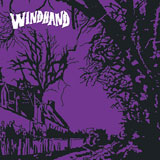 If you’re here then there’s a pretty good chance that you are (at the very least) familiar with a little-known band called Black Sabbath. Some of you may even own a few of their records. Others of you may have even been inspired enough by them to start a band of your own (and rewrite their songs under different names). So let’s just face it, Black Sabbath are fucking awesome and they are probably one of your favourite band’s favourite bands. But very few bands have been as shamelessly, repeatedly and, for the most part, poorly emulated as those Brum doom lords. Which is why Windhand are such a breath of fresh air.

At first glance you might be confused because Windhand are clearly unashamedly Sabbathian in the same way that many other heavy bands are. The difference is that Windhand do Sabbath with such unadulterated and unapologetic rock swagger that they somehow manage to make the sound their own. They also make you want to jump out of your chair and start stomping around the workplace punching co-workers as you go by in a mindless haze. Or maybe I just hate my workmates. Regardless, the Richmond, Virginia band, who first piqued the interest of the stoner and doom community last year when they released their excellent two-track “Practice Space Demo”, have now released their self-titled debut which sees them continue in much the same fashion.

In fact the album is book-ended by the same two tracks from last year’s demo, albeit in their re-recorded and fuller-sounding forms. And the new songs don’t deviate too far from the formula of those first tracks: Big Muff-enhanced riffs forging singular paths into the next Big Muff-enhanced riffs with the occasional guitar solo to create an opportunity for listeners to swing their heads round and round and get lost in the psychedelic landscapes the band forge. Structurally the songs are simple and uncluttered, the pace is pleasantly slow, Ryan Wolfe drumming lazily (in a good way), waiting for the right moments to throw in the occasional fill.

But what really makes Windhand stand out is singer Dorthia’s vocals which float omnipresently over the primal, molten riffing below her like a toxic vapour. On first listen I thought the singer was a man with a Perry Farrrell/Ozzy Osbourne-by-way-of-Mike Scheidt style delivery but further spins revealed the inherent and unique femininity in Dorthia’s warm voice. Even more impressive are her vocal melodies which are memorable and instantly familiar, particularly on “Heap Wolves” where the vocals weave in and out of the riffs in the way that Layne Staley worked his way around Alice in Chains’ twisted melodies.

Featuring former members of Facedowninshit and Alabama Thunderpussy, Windhand always stood a pretty good chance of being a good band and the “Practice Space Demo” certainly fulfilled that early potential. With this full-length they’ve carried along the same path and expanded their repertoire. What the band needs to do now is offer more in the way of variation to prevent them from becoming yet another in a long list of Sabbath clones. For now though, Windhand are an awesome all-conquering beast who you should seriously consider investigating.