Some things are like buses; you wait ages for one, and then two come along at once! Therefore, today we present to you not one, but TWO great new bands of the lysergic persuasion from Finland, approaching psychedelia from rather different angles, both to great effect.

First off, Warp Transmission’s brand of trancelike rock’n’roll, a 7” called ‘Accidents And Madness’, it’s really great seeing late eighties/early Nineties psychedelia being re-appraised of late, since the titans that spearheaded the cause of all things Paisley in those years have (until recently) languished in relative obscurity. This bunch of degenerate wasteoids from Tampere have regaled us lovers of all things heavy with two tracks of nigh-perfect blown-out mindfuck, drawn from Monster Magnet (Tab/Spine Of God era only, of course!) and Loop. Hell, I can even hear traces of the first few Desert Sessions/Earthlings in there! Utterly insane, out of control, whooping vocals/screams over driving, sexy riffs – the thing is, what Monster Magnet did with the likes of Hawkwind was added SEX to the equation, and Warp Transmission have Wyndorff’s (knowingly ludicrous) swagger in spades! Add to that some fantastically gaudy boobs in green and red (Frank Kozik would have been proud), and the general impression that the whole band was utterly out of it when they recorded these two great tracks, and you have what is likely to be my favourite 7” of the year.

Heavy Smoke’s influences lie solidly with the Teutonic ragas of the Seventies and the mind-bending Les Rallizes Dénudés (although thankfully not as terrifying as Mizutani’s stubbornly monotone power rock trio). All rolling basslines and searing waves of feedback (or is it a recorder on the last track of side A? Nik Turner eat your heart out!), Heavy Smoke create an atmosphere that alternates between soothing Zen (where ego is annihilated and replaced only by thoughts and colours dictated by the music) and anxiety-inducing repetition that stays in your head long after each song has finished. The B-side (a separate and, I suspect, earlier demo to that found on side A) has a decidedly rougher feel, and is no worse for it; the mongo-punk sensibility to the drums is halfway between early Can and Hawkwind at their scrappiest/fastest. ‘Orgone Accumulator’ being played by primitivists who find three chords an extravagance – my kind of music! Brilliant artwork (presumably courtesy of guitarist Ilkka of Seremonia/Steel Mammoth/Haare fame) and presentation/production refreshingly free of pretension make this tape a very enjoyable little release indeed.

I’m REALLY looking forward to what these two bands will do next – both filthy, greasy bands with very different ways of getting your mind “out there”. 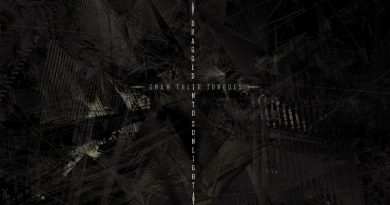