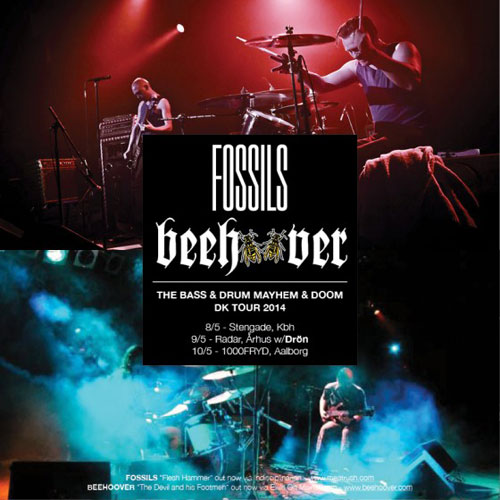 The two bass and drum based rock-duos, Danish FOSSILS and German BEEHOOVER, join up for three May dates in Denmark under the name of The Bass & Drum Mayhem & Doom Tour DK 2014.

Noise rock duo, FOSSILS, recently released their second album, Flesh Hammer (review here), through Indisciplinarian. The album has been praised by national and international media alike and in connection with the release, the band played two very successful Danish release shows. Now the Danes will have another chance to witness the explosive duo live in May, where they will play three shows in Copenhagen, Aarhus and Aalborg alongside German doomsters, BEEHOOVER. Unique for this lineup is that both bands are bass and drum duos, but as where FOSSILS is purely instrumental, BEEHOOVER incorporates vocals; very huge, gnarly and distinct ones for sure.

Duo number one, BEEHOOVER, has forged an original style of doomy and complex rock since 2007, having released four albums to date — all on esteemed indie label Exile on Mainstream — the latest being the critically acclaimed The Devil And His Footmen (review here) from 2013. BEEHOOVER has a very solid name in the German rock scene and has toured all over Europe, especially in the UK, which they’re playing nine shows these very days. The three upcoming Danish shows will mark the band’s first visit to their northern neighbors in Denmark. The Devil And His Footmen can be streamed HERE.

Duo number two, FOSSILS, released their debut album, Meat Rush, in 2011 and the live EP, The Veal Thing, in 2012. Through playing shows in Denmark with acts such as Liturgy, ZU and Health as well as touring the US, Germany and Iceland, the duo has stirred up a strong reputation as a powerful live band. Their second and latest album, the severely intense twenty-minute Flesh Hammer is an impressing display of the bands both head-on direct, thundering and also intelligent and challenging rock n’ roll rooted in metal, punk and hardcore. Flesh Hammer can be streamed HERE and ordered from Earsplit Distro HERE.