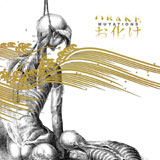 Change isn’t always welcome and, while the departure of Zu’s Massimo Pupillo from the ranks of Obake’s finely-honed jazz-sludge machine should have been a harsh blow, the drafting of Colin Edwin (Porcupine Tree) in his stead has resulted in a much darker trip, a snaking behemoth of a record that coils and squeezes until your head pops clean off from the pressure. Essentially, its metal, made for, and by, those who respect the genre yet refuse to adhere to stylistic conventions, an avant-sludge album that’s neither as pretentious, nor as impenetrable, as that tag might suggest.

The first impressions of Mutations don’t suggest anything out of the ordinary; Seven Rotten Globes is an impressively hulking wedge of space-sludge, a bass-heavy stomper that redoubles its weight with the guttural grunts of Lorenzo Esposito Fornasari and some concussive drumming, slamming down with each strum and volley of fuzz. It’s then that the details start to pile up, like how the riffs seem to spiral out for longer than most might dare, or the way that Bálasz Pándi’s drumming launches into vicious, dervish-like vortices of octopoidal madness. Even Fornasari’s subtle dips into richer, more operatic tones seem to sneak up on you, though perhaps it’s simply that the riffing is so unrepentantly huge that banging your head seems like the first priority, and everything else is secondary.

This is possibly why the album works so well. On one hand, it is an imposing and intensely physical construct, turning its ravening eyes over every doom/sludge/groove metal album around, piecing together snapshots of heaviness and presenting its Frankensteinian creation in all its might and horror, yet on the other, this monster is made all the more intriguing by its innate unpredictability. It’s liberally spotted with otherworldly sounds, with moments sounding like the recording room is haunted by the ghosts of a cadre of Franciscan monks and others like the rapture itself, and it’s all too common to suddenly find yourself lost among corridors of near-silence, the slight echo of guitar or a fractured, distorted sample the only companion on the solemn journey.

The second half of the album finds itself straying even more confidently into this disconcerting territory, Second Death Of Foreg foregoing much of its weight for haunting sways and gentle melody, Pándi beating out a propulsive rhythm over swathes of tremolo and a lighter-than-air contribution from Fornasari, while Burnt Down’s unsettling nods to Angelo Badalamenti owe more to the jazz and avant-garde roots of its members than any attempts to seize metal brownie points.

Perhaps unsurprisingly, due to both the ground covered and to the musicians involved, there is an impressive dexterity to the individual performances on offer here. Edwin is commendable for his punctuality and devotion to tone, yet he is able to inject a gently confident air to the most low-key of passages, essentially acting as driving force on his own, while Pándi is a consistently elastic drummer who never thinks of trading off power for fluidity, or vice versa. Eraldo Bernocchi proves something of a wild card, seemingly a metal everyman yet instinctively shifting and mutating his sound to match and sustain his rhythm section, a skill honed from their time together in prog-metal ensemble Metallic Taste Of Blood, though demonstrated to significantly more impressive effect here.

It would have been all too easy for these four to tailor this album to Rare Noise’s regular clientele – Pándi and Edwin in particular have created great, genre-smashing works here – but Mutations is, in many ways, a much more attractive proposition. It has the bulk and density to keep even the most stoic of Sabbath fans amused, yet it’s almost entirely non-linear. Nothing is as it seems, from the circuitous structures to swift shifts in tone, atmosphere and execution, and it presses great importance on the smaller details, the minute shifts that present great tipping points in their dynamic surroundings. Is it jazz for metalheads, or metal for the jazz crowd? In Obake’s eyes, it’s probably both.