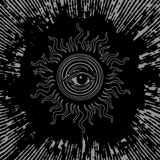 Another strong debut from a hitherto unknown entity rears its head here, in the form of this four song LP by Usnea.

At times the band come across almost as a ragged little brother to NOLA’s celebrated DIY doom titans Thou in both the melancholic tone and sheer heaviness – although Usnea have more explicit touches of something verging on the glory days of Peaceville’s back catalogue in their melodicism, and moments of violent yet thoughtful black metal that slides them in nicely alongside their countrymen in Fell Voices and Ash Borer. They aren’t strictly hemmed in to any doom by the numbers, slower-than-thou notions of genre.

This variety allows for a set of songs that flow very nicely, but individually and as a whole. ‘Chaoskampf’ is a lot more forlorn and melancholic than you’d expect the name to suggest for its first half, before they up the pace and intensity to let those aforementioned BM aspects bleed through. ‘Brazen Bull Of Pharis’ opens with another swathe of amplified sorrow that’s one of the most majestic moments on the album.

A quick note here – the 12″ vinyl this is released on is a mere two songs, due to length constraints of the format, but the album proper includes four songs, the additional two coming as a download code with the album. ‘Monuments to Avarice’, one of those, is the best thing here, and their finest moment so far. It’s really only the stock sub-Sabbath riffing at the start of closer ‘Empirical Evidence of a Deranged God’ that lets them down.

We forget, sometimes, that the best ‘doom’ should convey emotion – be it sadness or slow burning rage – rather than be an excuse to simply tune your guitar down and play through the loudest amp possible. Usnea’s ability to inject a real feeling of sadness into their tunes without sacrificing any heaviness is to be envied in a sea of faceless sludge bands right now.