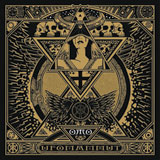 Previously on the Oro Opus series…
Italian psyche-drone-doom-sludge shit-kickers Ufomammut battle through the galaxy upon a haze of steel-tinged fairy dust, warding off true evil with a raft of devastating riffs and heightened cosmic enchantment. A five-note motif guides us through caverns, gorges and viaducts of sonic purity on a quest to save us from impending sabotage and destruction. Amongst all of this chaos, the mighty ‘Mammut are attempting to forge gold itself by blending enough layers of green amp-powered imagination to warp the Earth’s collective minds into a frenzy of skull-flattening ecstasies. Blimey.

Connection lost… Searching for signs of life… Resuming transmission…
Back to basics. Alter is the not exactly long-anticipated follow up to Oro: Opus Primum, which came out in 2012 AD to widespread fan and critical acclaim. Drummer Vita, guitarist/FX-guru Poia and bassist/vocalist Urlo now continue their quest to get one up on all those who thought that Dopesmoker was a long record by building on Primum‘s vast glaciers of warm hypnotic tones and monastery-crumbling mantras. The two records are intended to be bolted together, but for me at least the immediacy with which Alter hits the speakers leaves it raging across a sludge battlefield in a position opposing Primum, rather than embracing it, in a true triumph of heavy metal fusion.

Mentioning Dopesmoker is an obvious starting point with Alter. The way Poia builds his E-string heavy layers is more than a tad reminiscent of Pike and Cisneros’ riff-churning on Sleep’s epic adventure, and when the enormous bass rumble hits on opener Oroborus, it really does feel like you’re falling, oxygen-less, from a space station, into the void of the universe. Oroborus keeps to its name well: a hypnotic and circular rhythmic pattern is deployed, with eerie control-centre background effects keeping the left side of your brain a-wandering whilst Poia mercilessly blasts laser after laser of sonic brutality across the galaxy. It takes no more than a minute to realise that this is already a riffier effort than Primum, and one which is more Neanderthal and raw for the most part. The Sleep comparison is unfortunately a lazy one from me as Ufomammut do so much more with that same head-swimming sound, but it’s all relative, and after Oroborus, it feels like we have come full circle back to the birth of stoner metal itself, albeit via some glorious new pastures.

Luxon is a yet further fractured oblivion to begin with as rays of warped noise slowly converge towards Urlo’s first slow and mantic wails and Vita’s ponderous snare marches forth into the emptiness. Versus the repetition and solidarity of Oroborus, Luxon is loose and chaotic, yet somehow glorious in its development towards a closing chug from Poia’s mighty amp-blaster. There’s a space race going on here, and it feels like we’re aboard the Millennium Falcon on a lazy Sunday cruise around the cosmos.

Much of Alter centres around the sheer enormity of the central piece Sulphurdew: a 12-minute-plus goliath of a track which quickly kicks away from a background haze with a beefy and juddering, clear-toned sludge riff as Vita supports from beyond the darkness with a beat that speaks of sheer evil and torture from worlds afar. As usual, the ‘Mammut make us wait as they construct a delicate spider’s web to capture their doomed kill, but it’s all worth it as the FX samples usher in our impending desolation. Colossal lances of wavering bass rain over us and the riffs transport your mind back to the first time you ever heard an electric guitar and fell helplessly under its seductive spell. Sulphurdew manages to be both gruesome and beautiful at once; a prayer to the devil or occult worship to the Gods of man, it’s simply a cranium-expanding wonder of how far electronic sound has come since Thomas Edison first patented the phonograph and made dreams like this possible. Sublime.

…Which is by sheer death-defying coincidence the name of the fourth passage! A rather more psychedelic affair for its four minute intro eventually gives way to a whirlpool of riffs and chugging bass. If Luxon was the Star Wars comparison, then Sublime is the insanity of 2001: A Space Odyssey in musical form. Intimidating and sinisterly well-calculated, but fractured and deranged like some sort of super-computer dictatorship; it’s as if Acid Mother’s Temple are being force-fed a hash pipe by Yob and Bongripper for several months. On Saturn. This booby trap of a track leads us into the cold hearted menace and Oro Opus game-over boss Deityrant – another staggering labyrinth of distorted samples, ear-dissolving bass lines and snare batteries. Rather than a somewhat anticipated happy ending, Alter finishes with a squealing nightmare and droning feedback fade-out to finally return the mighty ‘Mammut to its icy lair in a dimension so sacred that our minds cannot contemplate its possibilities.

So there it is. We’ve transcended the peripheral and regained our souls along the way. As separate entities, Alter is the riffier bullying big brother to the seductive, grandiose, but still demented little sister of Primum. Together they embrace each other and you as their cargo, in one movement of staggering complexity and vision. But the mission is over, gold has been forged and minds have been obliterated. What next for the evil Ufomammut and his three slaves to the vast desert of scope and power? Who knows, but if the ’Mammut’s past potency is anything to go by then another Alter ego should arise to the murky surface to begin the next opus of incomprehensible brilliance.