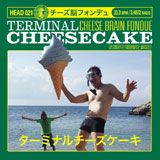 The recently reanimated Terminal Cheesecake, now replete with newest recruits Neil ‘The Fish’ Francis (Gnod, 2 Koi Karp) and Dave Cochrane (God, Head Of David) are well and truly back on the scene. This latest release captures their live assault at the L’Embobineuse, Marseille, France last year, riding the wave of their new found energy and proving, without a shadow of a doubt, that they have a lot of life left in them that wasn’t altogether expelled back in the late 80’s early 90’s.

Fake Loop opens the proceedings with a false sense of security, fuzzed out guitar repeats as the vocal renditions of Neil the Fish join the fray. Slowly but surely each of the other members offer up their instrument of choice, building to a crescendo of screamed anguish, only to fall away to make way for the beast that is Bladdersac. Signalling the onset of an LSD frenzy, Bladdersac crushes you with a deep and heavy hook of a riff that seethes with raucous energy, the frenzied high end weaving in and around the main riff, adding even more momentum and delights for the brain to try and decipher and process. Once your senses have been suitably overwhelmed, Terminal Cheesecake slide beautifully into Johnny Town Mouse which adds more of the same, except this time the vibe is slowed down somewhat and the coherence of Bladdersac’s more palatable moments are completely noised out. All the while a huge lumbering riff adds more sinister overtones to proceedings, showing how psychedelia can still do ugly with the best of them, albeit after a few caps of mescaline and a healthy dose of absinthe.

Crowd favourite and probably their most ‘well known’ track Blowhound lumbers in, swaggering with its stop/start bassline and deep, psyched out fuzz fests, a great track and sounds reinvigorated being channelled through the latest incarnation. Poultice acts as a breather – albeit one that is way out there, riding the invisible wave to the stars on a psychedelic magic carpet.

Herbal Spaceflight breaks into epic territory, clocking in over the ten minute mark, the group conjure up some sonic alchemy for the mind with this heavy, grinding beast. It’s a constant build, you can almost touch the summit, but then, they pull back, letting everything grind gloriously ever onwards before gravity itself pulls down on them, slowing everything to a deliberate crawl as the psychic climax is achieved. A superb track and a complete odyssey of the mind. Lazy Hard On has a rough around the edges, garage punk vibe going on amongst the heavy wigging out, sounding like its going to burst apart at the seams at any moment, but just about clings to some semblance of coherency. That was the last blowout before the finishing ritual that is VCL – the final sign off for the evening clocks in of just shy of 19 minutes, taking you on a very strange journey, forever yearning for that peak to break and carry you off into noised out oblivion…

A superb moment of time captured for the enjoyment of your ears, mind and soul, so get on over to Artificial Head Records and grab this sharpish! Also do yourself a favour and the next time these guys hit your town, go show them your love, hopefully then we won’t have to wait as long for a slice of new cheesecake.