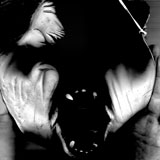 It took me some time to decide what to do about this record. I couldn’t review it straight away because I simply didn’t know what to make of it. Hopefully all will become clear:

Firstly, the cover of the record is a colour-drained monochrome shot of some hands holding a rubber Halloween mask. Creepy.

Opener ‘Sakura’ is sheer noise terror. Make no mistake: when I say that, I mean it. It opens with a breath. This breath becomes the noise that unleashes an apocalyptic stew of digitally distorted in-the-red vocals, blastbeats and off-time drumming, and a creepy synthesiser choral background noise. Lasting 1:38, however, it’s merely a hors d’oeuvre.

Let me mention the dude’s voice. It’s fucking hair-raisingly shrill. It sounds like an animal dying. It fits the sound of the instruments perfectly.

‘Hair, Skin, Nails’ hits you with nails-on-blackboard screeching feedback before morphing into something resembling sludgey metal, while the lyrics are a touch risqué – ‘bile, semen, ovum, womb, rectum, teeth, vagina, anus’ are about the extent of what I made out of the clean vocals on first listen. ‘Paraded by a thousand tiny dwarves’ is another highlight – who is listening to the lyrics anyhow? Despite this, the lyrical violence continues in ‘I Will Choke You Till You Like It’ – and the white noise metal attack of the previous tracks cranks up a level. Intense don’t cover it. It’s a highlight of the record, too – the sludge-appeal will attract metalcore dudes as much as fans of dense sheets of noise.

Tracks 4&5, ‘Become Meat’ and ‘I Am Taking All Of You With Me’, combine into 20 minutes of brain-grinding hell. The latter is a deceptive little fucker – it starts with a delicate little dit-dot-doo door-bell melody & a ghostly vocal drowned in mild feedback. It’s even quite pleasant for a while. It’s most similar to Uboa’s previous album – you can listen to it on bandcamp – a melancholy vibe hanging over some heavy themes. ‘Become Meat’ is a rather unsavoury tale of people sitting in their own shit set to more muscular noise, until the halfway point, where something strange happens. Uboa seem to have placed a poppy vocal melody on top of their assault-and-battery sounds. Dig it!

The track which lends its title to the album, or vice-versa, ‘Jouissance’ is a Yes-length prog-sludge epic (13 mins.) with some crackly guitar drones and hums. On their Facebook page, Uboa mention that this recording took three years to complete. It’s on tracks like this and ‘I Am Taking…’ that make me believe the sheer effort that these recordings amount to. Closer ‘Avalon’ is a reprise of ‘Sakura’, by my estimation, and it closes the record exactly how it was opened: terror.

The lyrics are horrific. The music is horrific. The entire fucking mood of the album is designed to antagonise the listener, to awaken in them some kind of cathartic anger. Whenever I’ve got the need for real horror show music, I reach for Swans or early Carcass, Jesus Lizard or Teenage Jesus and the Jerks. But it’s Blixa Bargeld’s legendary (& incalculably influential) noise droogs Einstürzende Neubauten that push those (my) buttons best, hitting their fans (me) in an electric-burn sturm-and-drang fashion – I just wish Uboa had the wit, musical space and icy-cool machine-gun rhythmic sensibilities of Blixa & Co, but that’s merely personal preference.

Compare the train-riding-over-your-head doom-mongering-motorik churn of ‘Abfackeln!’ to the monstrous metal grind of ‘I Will Choke You Till You Like It’ to see where on the spectrum of noise-deviants you fall. (E.N. are the lurching, creeping Boris Karloff’s Frankenstein’s Monster to Uboa’s Silent Hill mutant-at-the-door button-mashing menace). ‘Jouissance’ may be the most caustic musical experience you put yourself through this year – and ‘Sakura’ is undoubtedly worth recommending as a taster. Aren’t we all in need of an hour-long sonic cranial surgery? All together now… ‘Always look on the bright side of life…’