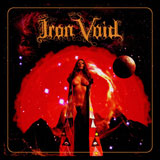 With a name featuring the words “iron” and “void” (and bugger all else), a record label who’s mantra reads “Proudly Stuck in 1985”, band members clad entirely in denim, leather and band t-shirts coupled with a front cover depicting a buxom naked lady cloaked only in the colours of the cosmos and I believe, ladies and gents, that we have arrived at the land known as Doom for the 666th time.

Wakefield, Yorkshire’s Iron Void have been around since 1998, but have only recently been resurrected by bassist/vocalist Jonathan ‘Sealey’ Seale to make the always welcome van drive to Black SabBath via PentagRamsgate and The Gates of SlumBerwick. Now rounded out by Steve Wilson on guitars and vocals and Damian Park behind the kit, Iron Void stick to what they know best – dooming all over the world atop Steve and Sealey’s grandiose vocal tones. If you’re looking for frills, ethereal interludes, keyboard solos or fancy atmospherics, please don’t bother reading any further. This is doom metal as good Beelzebub intended – pounding drums, down-picked riffing, colossal bass stacks and soaring wah-wah-guided guitars. Having gigged with the likes of Pagan Altar, Lord Vicar, Solstice, Asomvel and The Prophecy, Iron Void certainly has the pedigree and the tunes to cause some serious damage.

One card that these Northerners play well is their varying pace. One minute you’re stood stock still, only nodding a little forehead to the Saint Vitus-esque Those Who Went Before, the second you’re smashing things like a lunatic to the sublimely upbeat Own Worst Enemy or throwing the claw to gods of the Grand Magus form on I Am War. Wilson certainly knows his way around a riff or six thousand and the bulldozing opener Tyrant’s Crown alone is enough to fulfill your prescription for the week on its own. Park’s drumming is solid, if not uncomplicated and the likes of Black Mirror and The Burden Of Regret trundle by as if the Gates of Slumber never unfortunately left us. Another string to the Iron Void bow is the happy marriage of Wilson’s high-end Messiah Marcolin-y vocals with Sealey’s Cronos-ish metallic bark, meaning that the band are able to hit all the doom call cards in equal measure from the quivering and eerie Necropolis (C.O.T.D.) to the boogie-laden, gas-guzzling highlights of Own Worst Enemy and Outlaw.

The issue with traditional doom is there’s very little place to hide away from comparisons to all the you-know-whos of the genre. Iron Void get around this by embracing all the greats seemingly equally. I wouldn’t want to compare them any more to Count Raven, than to Reverend Bizarre, Witchfinder General or Cathedral circa The Carnival Bizarre. What you won’t get with Iron Void is a gap you haven’t had filled before, but they’ll more than adequately fill it again and again and again with their catchy odes to Satan, war, death, graveyards and clinical insanity.

Ronseal Doom? Maybe this is. But on the other hand it sounds ruddy rocktacular, so get your mates round, crack open a crate, crank this loud and scare the living fuck out of Mavis next door.

Iron Void are back in business and if dooming is that business, then business is bloody good.