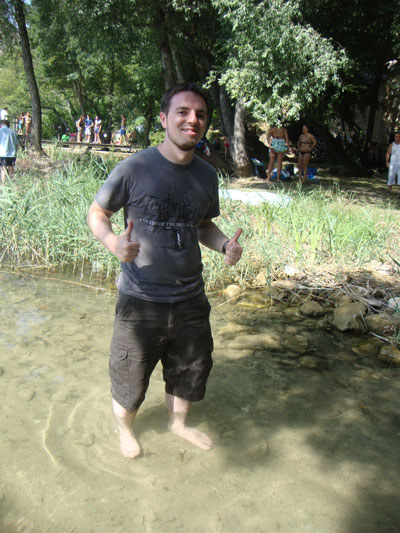 “Better late than never!” It’s a piss-poor mantra to live by but one that I’ve unfortunately had to use on several occasions to Shaman Lee over the past 12 months (sorry mate!) as our 2013 draws to a close. This year has been a very challenging one for myself on a personal front in a few different respects that you’ll almost certainly not give a monkey’s Uncle Acid about, but nonetheless it’s been a busy old year for music-related awesomeness too. Music has always and long continues to keep me sane in any passing hours of darkness, confusion and of course equally those of wide-grinning, beer-swilling glee. It’s simply fantastic to continue to review, interview and commentate on the seasoned pros and the unknown commodities alike in our sphere of heaviness and I feel very lucky to be able to do so.

It would not be possible, nor very interesting, to list everything I’ve heard or seen this year but there’s a few special occasions I would like to recap on:

DesertFest – It’s a huge privilege to be involved behind the scenes once again to help organise what’s become one of the UK’s premier underground music festivals. 2013’s edition was the best yet, featuring everything from genre-defining legends like Pentagram, Fatso Jetson, Unida, Dozer, Lowrider and Colour Haze to the hard-hitting new generations lead by the likes of Trippy Wicked, Prosperina, The Shrine, Gurt, Kadavar and Conan. However, for me, Bongripper in their closing performance on the Sunday night stole the entire weekend and crushed it into the palms of their doom-soaked hands. They were so heavy it was painful, yet beautiful and mesmeric all at the same time. DF 2014 is going to be incredible – make sure you’re there with us!

Interviews – It’s been cool to do a few more interviews this year and chatting to the likes of Conan’s Jon Davis, Kustodian’s Sean Corcoran and Corrupt Moral Altar’s Tom Dring has proved to be fascinating, hilarious and insightful each and every time. Note to self: do more interviews in 2014!

Scruffy Murphys – The murky, yet friendly bar under a central Birmingham car park has once again become my new local haven of all things musical and wonderful. Huge thanks to Mez, Oli and Emma at Heretic Promotions for some of the killer shows they’ve put on this year and for always being lovely people to see at any show. I’ve seen so many gigs at Scruffs this year, but a special few which hang tight in the memory are: Bell Witch /Samothrace, Trippy Wicked / Wight / Bright Curse / Shebrew, Groan / Iron Hearse / Mage / Gringo and Black Moth / Alunah /Prosperina /Heavy On The Ride. Great work guys you are the scene, keep it up!

Stoke – It takes a special kind of commitment/idiocy to drive from Leamington Spa to Stoke-on-Trent and back again on a random Tuesday night just to see a gig. I was proud to make that commitment in order to receive the total annihilation rained down on me by Space Witch, Årabrot, Bison B.C. and the simply incredible Black Cobra in front of about just 20 punters in a venue called Minsters Bar which was basically a derelict cafe with no stage, no drinks and nowhere to hide. I don’t think I’ll ever forget this show – weird and wonderful in equal measure! Special thanks to Paul Butcher for keeping me sane and awake on the way home! That following Wednesday morning was not a productive one!

Best of the Rest – High On Fire, Saint Vitus, The Sword, Kvelertak, Truckfighters, Ghost, Gojira and a very many others travelled from afar to put on stunning shows for us over here on our little island. Thanks for making the journeys guys, you were all spectacular!

All that remains is for me to say a huge thanks to Shaman Lee for his guidance, his incredible hard work on the site and an outstanding array of opportunities for the likes of little old me. Equally, thanks to everyone who’s given me an opportunity to review something awesome this year – I hope you all know who you are! And finally, thanks to you guys – our growing swarm of titanium-eared readers who read, comment and support The Sleeping Shaman in any way, shape or form – cheers n beers!

And without further ado, here are my Top 20 records of 2013! I hope you dig/dug ‘em too and if your favourites aren’t on there – do feel free to get in touch and chuck me some suggestions for 2014!

Church Of Misery ‘Thy Kingdom Scum’
Forget Sabbath, THIS is how you do doom metal in 2013; bruising, uncompromising, harrowing and bags of fun, CoM have taken their serial-killer-soaked boogie train to a whole new level.

Carcass ‘Surgical Steel’
I don’t even go for death metal usually, but Surgical Steel kicked my face in from start to finish, not least down to Bill Steer’s incredible mastery of the six-sting.

Vista Chino ‘Peace’
After the whole law suit thing with J.Ho, I wanted this album to be rubbish or at best a collection of Kyuss-pillaging wannabe tracks but I was wrong – this is a truly beautiful stoner rock album.

Rival Sons ‘Head Down’
Yes it’s major label, yes it’s mainstream, yes it’s over-produced up to the eyeballs, but listen to that songwriting and tell me you could write better hooks…you can’t.

Vodun ‘Eat Up The Sun’ EP
Raw, fresh, original, mysterious and devastatingly heavy – ex-Invasion architects Chantal Brown and Zel Kaute are back with a voodoo-laced bang!

Queens Of The Stone Age ‘…Like Clockwork’
Another record I thought would suck, but didn’t – Mr Homme elevates his status as a harmonious and versatile songwriter extraordinaire with another set of weird and wonderful mega hits.

Deep ‘Vol.1’
Sometimes it pays to just stick your neck out and review something you have no predisposition to at all – this was one of those times: trippy, cosmic, yet groundbreaking stoner mechanics from Italy.

11Paranoias ‘Superunnatural’
This was only ever going to be a dark, fractured trip into the void with Adam Richardson, Mark Greening and Mike Vest on board as a new doom supergroup – ‘Superunnatural’ didn’t disappoint.

Ghost B.C. ‘Infestissumam’
Doom-pop heroes Ghost B.C. have gone and charmed us all over again – gimmicky yes, one-trick-ponies no.

The Ocean ‘Pelagial’
A huge concept piece intended to span the surface to the bed of the ocean: mesmerising.

Desert Storm ‘Horizontal Life’
At last a stoner rock album from the UK which stands head-to-toe with any band the US can boast.

Iron Hearse ‘Get In The Hearse’
Quite simply the most addictive set of riffs and choruses I’ve heard all year.

Mothertrucker ‘The Power of Independent Trucking’
Thoughtful, well-layered and even finds time to be self-sarcastic – the best ‘Trucker record so far.

Kadavar ‘Abra Kadavar’
I must admit, I don’t yet own this, but from the tracks I’ve heard it’s more retro than a VW Beetle.

Elder ‘Live at Roadburn 2013’
Timeless, masterful stoner-prog goes down at the Roadburn debut of one of the best psych-rock bands of the moment. 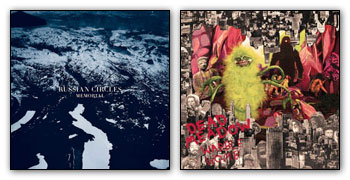 Russian Circles ‘Memorial’
Santa’ has only just dropped this down my chimney (ooh-errr!) but I can already tell it’s: heavy, brooding, beautiful and back to their excellent best.

Dead Meadow ‘Warble Womb’
Not one of their classic albums, but still a beautiful piece of sepia-tinged psych.