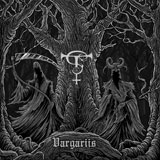 If you’ve ever been in or around the dramatic Scandinavian scenery of Norway, you’ll know what inspiring, enthralling and enriching experiences the great Norse nation has to offer. From the bustling hubbub of downtown Oslo, through the beautifully desolate fjords that span the Nordic coastline and onwards into the arctic North, the grim darkness punctuated only by the twinkling lights of the likes of the glistening Tromsø and the hundreds of twinkling fishing ports; no place on Earth has a landscape as gorgeous or as foreboding. Is it any wonder that bands as devastating as Enslaved, Mayhem and Satyricon have emerged from this mountainous mass of brutal cliff-faces, icy glaciers and face-whipping frozen winds? One listen to another new Norse opus in Tombstones’ Vargariis leaves a rather resonating “No” echoing through the mountains in response to that largely rhetorical question.

Now on their fourth full-length, Tombstones have settled into a groove as a low-end, bulldozing, doomy three-piece with Bjørn-Viggo Godtland on guitar and vocals, Ole Christian Helstad on bass and vocals and Markus Støle behind the kit. Their last effort Red Skies And Dead Eyes was, to me at least, a rather overtly one-dimensional piece of Sleep-worship (not necessarily a bad thing!) but within thirty seconds of lift-off here you can tell that Vargariis has a lot more to offer.

Kicking off the ominously doom-laden rumblings of Barren Fields with a riff that swings harder than opinion polls on election night, Tombstones, as ever, sound absolutely gigantic and already triumphant in their quest for amplifier abuse. The vocals sit back behind the instrumental action on this track, a little like the gloriously explosive back-room hymns on the early Kylesa records. The hypnotism that the band have always brought to the party, á la the likes of Om and Acid King, is back in abundance, but there’s a delicious amount of shifting in the dynamics throughout the opening track, and several of Vargariis other monoliths, that could appeal to the ears of even the more casual QOTSA or Dozer fans.

One of the band’s real strengths is the vocal interplay between Ole and Bjørn-Viggo with the bassist’s low-end bellow seguing neatly in and out of the carnage complimented by the guitarist’s higher-pitched cries which cut above the rumbling riffage. This effect comes out to play a lot more on And When The Heathen Strive, Vargariis Rise, a more brooding track which plays off the tensions of metallic plunder applied to deathly silence, more so than on the more deliberate Barren Fields before fading out into a rippling Isissian pool of post-metal grandeur.

The furious opening of Oceans Of Consciousness features tremolo picking and blastbeats as a nod to the heritage of Tombstones’ black-metal brethren from Bergen, before opening back out into familiar Matt Pike territory with enough distortion to knock a cruise liner off course. It feels initially like Tombstones are rapidly descending down the valleys into the truly deafening and fractured pool of the likes of their peers in Monolord. But there’s simply more to their songwriting than giant riffs and backed by Støle’s cavernous drum sound, the dual frontmen explore every cave of weedian slumber on offer in this ten-minute workout.

The Dark High is more of an atmosphere track – marrying the pace and power of Sleep’s Dopesmoker to the groovier pace of early Ufomammut. Again the power-trio slow right down in the middle of the arrangement before raging back into a bluesier jam-room conclusion that we’ve come to expect from their barrelling earlier material. It’s not Sleep, but it’s almost as enrapturing at times.

Underneath The Earth, as the name suggests, takes a dive for the murkier tones and the chunkier drum arrangements, but there are some glorious rolling bass-lines and truly scything guitar work that belies the band’s youthful energy. The cosmic stoner wrap-up of the final two minutes gives the underlying melodies space to breathe underneath the Earthly weight of guitar-mangling feedback.

Pyre Of The Cloth stokes the bassy rumble back up to the surface before rocking and swaying on it like a great galleon on the windy high seas. There’s a sense of closure impending in its bludgeon of the ears as the riffs fracture and break down underneath the strain of Bjørn-Viggo’s caustic rasp and Ole’s Cisneros-esque trips behind his Rickenbacker. In the end, the closing track falls down a cavern of its own creation into the snowy depths and you’re left wondering how Colour Haze melodies could ever fit so sweetly inside a Weedeater groove all whilst reminding yourself that, yep, they just did.

As the grey light fades and the remaining sun dances upon the horizon, distorting the colours of the sky behind the stiff, ragged mountain tops that form Norway’s fierce, but elegant backdrop, so too do the dying chords of Tombstones’ finest work to-date. This sort of record doesn’t happen overnight, it’s a combination of guts, guile, gusto and gaping heaviness that rightly deserves a bit of recognition as a damn fine doom metal album, even amongst a year of as many blockbuster releases as 2015 boasted. They may not run around in reindeer skins or set fire to churches to boost their own egos, but Tombstones manage to bring a little Norse magic to the template of the Sabbath; you’d be foolish not to a fjord this a listen as we enter the new year.