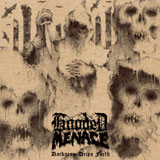 Hooded Menace are what people are talking about when they think of death/doom these days, even if they don’t know it. The Finnish masters of darkness have long been crafting a career from the sludgy, endless void of riffs, summoning Lovecraftian beasts to serve as their inspiration. Darkness Drips Forth is their new record, and while only four tracks, serves us some of the most tortured, dense and punishing death metal since their last emanation.

Blood For The Burning Oath/Dungeons Of The Disembodied belches from the starting blocks in typical, cavernous fashion.  A threatening, monotone hum drones from your speaker, screams begin to echo amongst it and then it happens. The riff descends from its place amongst the Dark Gods and comes slamming down upon us mere mortals. The voice of Hell erupts with malevolent intent; a gurgling, bilious roar that shakes the ground. Hooded Menace do creeping, crawling fetid death better than almost everyone, and Darkness Drips Forth is a perfect encapsulation of their sound. Even when the pace is upped slightly, nothing is lost from their sickly death.

Hooded Menace do more than just shamelessly worship the likes of Autopsy or Coffins. They drag you along a journey, a quest of sorts, through the realms of death and decay. In anyone else’s hands, ten plus minute dirges of death metal would become tedious and repetitive. Hooded Menace have mastered this art. It’s swampy but never unintelligible, as the mammoth lurch of Elysium Of Dripping Death shows. Vocalist Lasse Pyykko belches immensely brutal vocals, while each riff drips with a malevolent tone.

Ashen With Solemn Decay looms from the fog with a Cthulhuan might, like an ancient titan of death and doom. Hooded Menace reaffirm their status as the pinnacle of this genre with Darkness Drips Forth, because the extended song lengths allow them to create slowly, to build and to nurture that riff. In the same way a wave can build to a tsunami, Beyond Deserted Flesh builds the rumbling drums, the icy Swedeath chainsaw riff, the unholy utterings, into something that, by the close of its ten minutes, is an unstoppable cliff of death metal and doom.

Hooded Menace may continue this path, they may revert back to their shorter songs. But either way, Darkness Drips Forth is undeniable proof that they are the undead kings of death/doom, and their ashen granite throne shows no signs of cracking. Unbearably heavy, and unspeakably dark. 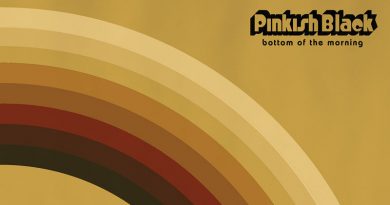