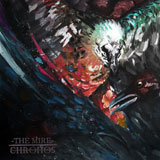 The Mire’s tendency towards teasingly short releases continues, as they further elaborate on the dynamic marriage of beauty, progressive histrionics and sludge brutality showcased on 2010’s Volume II. Though a full-length has still not yet surfaced, the Brighton rogues instead present this split with mysterious Kentish troupe Chronos. And as far as split releases go, this one is pretty damn cohesive.

Upon their inception, much was made of the presence of former Bossk member Tom Begley amongst The Mire’s ranks. However, the true visionary behind the project has always been vocalist/guitarist Robin Urbino, whose ability to fluidly trade-off a jagged bark against gripping clean harmonies forms an integral part of the band’s sound. As on past releases, Urbino’s production deftly balances all aspects, simultaneously providing enough space for atmospherics to hit home, while allowing the heavier moments to retain pile driving force alongside.

‘Dreamwrecker’ sets the tone of the record, and represents a shining distillation of The Mire’s songwriting thus far, with all the powerful riffs and earnest melodies that have set them apart. This flows into ‘Palmreader’, which admittedly feels more like an extension rather than a composition in its own right (though still great nonetheless). But as on previous releases, The Mire’s tracks never stagnate or outstay their welcome.

Chronos, meanwhile, imbue their brand of sludge with a startlingly varied palette (at times recalling colours of both Isis and the late Oceansize) that perhaps outpaces The Mire for sheer heaviness. Primal, thrumming bass lines pulse beneath the skin of sole Chronos track ‘Old Toby’, while frantic drumming and coarse snarling propel it through each transition of its span, like the stages of growth in the life cycle of some monstrous insect.

And that is what ties these bands together – the tendency of the arrangements to metamorphose in consistently interesting, surprising ways, amassing textures until critical mass is reached. Though not as instantly memorable as The Mire’s first track, Chronos nevertheless present a grand variation on similar sonic ideals, while forging their own distinct path.

Thus, this is an overall short release, but definitely worth checking out for a taste of two young British bands bursting with ideas and oozing with potential.