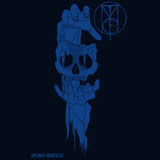 Northern Ireland, while hardly a mecca of all things heavy, has been known to throw up some serious riffage over the years. Slomatics obviously being the band many of you in Shaman Land will be most familiar with, but with War Iron not far behind them and the likes of the late, great Erode You/Wretch, the seemingly on ice Dwell In Sun or more recent upstarts like Abbotoir or Nomadic Rituals staking their claim… well, the area has plenty of dirt underneath the rocks if you know where to look.

Tome are another solid entry into the North’s sludge cannon. Taking a cold, caved welling spirit and applying it to some gloriously primitive riffing, this two song demo is already on it’s second pressing – in fact by the time you read this the physical copies are probably all gone. A good sign? Sure. There is, after all, a reason for it to have disappeared so rapidly.

Track one, “In Fire And Ash” is a confident introduction. All zombified riffing and topped with vocals that sound like someone screaming for help from the bottom of a well, it’s clear right from the off that the trio have a firm grip on exactly what they’re doing. And what they’re doing is ominous, fogged out doom that has just the tiniest hint of some of the darkest moments of the Tom Warrior discography. It’s clear also they know how to write a song – knowing just when to pick up the pace, and never hitting outright funeral crawls during the slower moments.

Second track “Void Cantation” begins with a nice eerie melding of feedback and thudding toms, building a foreboding atmosphere they keep up once the fuzzed out riff proper rises from the melee. We’re off on a steady march into hell as the riffs come thick and constant throughout this, the stronger of the two tracks. I think the word I’m looking for (to be said in your best Christopher Lee voice) here is “ghastly”. Many a black metal band could learn a trick or two about creating an evil mood in their music from this tune.

At times during this demo the spectre of the mighty Dream Death rears up in the general feel of what Tome are doing. No higher compliment can I pay a band in this style than that. “MMXII” is a promising two song debut that paves the way nicely for the band to build an identity of their own. They’re not quite there yet, but this jet black slab of amp destroying riff worship is leaps and bounds above many demo bands out there already, and surely some vinyl isn’t too far off if they can keep up the good work. Proper doom here, tormented, dirty and as dank as medieval dungeon.