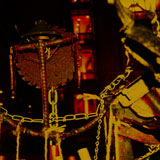 Well. I’ve had this sitting in my metaphorical review pile for a good while and, despite having listened to it in its entirety a few times, I’m still completely on the fence as to its relative charms. Having deliberated over it for some time, I’ve decided to just write as brutally honest a review as I possibly can and worry about the fence-sitting later.

Providence, Rhode Island, has been home to a number of space cadets and weirdoes over the years, most prominently, I would guess, would be the musicians and artists surrounding the two Brians of Lightning Bolt, but in Throne Of The Void In The Hundred Petal Lotus we have a new batch of space cases way out there on the final frontier.

I can tell you very little of the band, aside from that they are a trio – Indy, Nate and Mat – and I’m sure that they have links to Queen Elephantine, something I remember from back when I reviewed their first release on this very site. Aside from those snippets of information, I got nuthin’. Zip. Nada. Bupkiss.

Now, having said that these guys are resident in Rhode Island, it would appear that their real place of origin is in fact outer space. I mean, hell, they sure SOUND like they’re from outer space and they claim that Dark Geometer was recorded there, so who am I to argue?

The depths of deep space certainly inform the ambience during most of the six tracks that comprise Dark Geometer – all of which are entitled ‘6-6-6 Tabs’, which should give you some idea of where a large part of their inspiration comes from – and, indeed, there are vast swathes of virtually empty space liberally scattered throughout the entire recording…which is a contributory factor in my inability to truly get off the fence and fully enjoy or even appreciate the album.

Dark Geometer in its entirety is a hour and a quarter long, yet within that timeframe, there are only around twenty-eight minutes of sound that can actually be, loosely, termed ‘music’.  Aside from the second ‘6-6-6 Tabs’, the other five tracks basically sound like a recorder has been left running in the band’s rehearsal room, capturing them lazily ‘droning’ together, occasionally making a series of apparently unconnected sounds, but mostly standing around doing nothing.

During the opening track, a sound not unlike a slightly muffled droning sitar can be heard running right through the entirety of its twelve minute running time, with very occasional interjections of guitar notes and light drum taps, and this sound does re-occur during another later track at a much lower volume level, but, well, it’s really hardly more than background ambience.

As to the only ‘real’ track on here, that second ‘6-6-6 Tabs’, it is built around a churning riff that meanders and simplifies over time and driven by pulsing drums. It only stands out by virtue of being surrounded by nothing.

So there you have it. As honest an assessment of Dark Geometer as I could muster. Essentially a waste of time, on the whole it does Throne Of The Void…no favours at all and could even cause them to lose those of us who enjoyed their first release, leaving us to scratch our heads and wonder exactly what the point of Dark Geometer actually is. 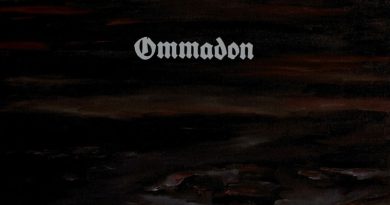 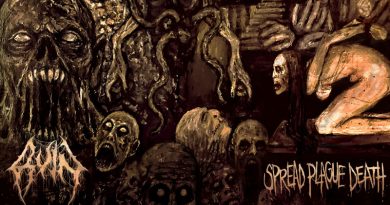